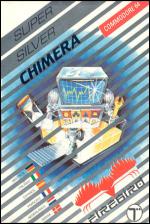 In the wake of Ultimate's popular Knight Lore and Alien 8, Firebird have launched the flagship of the Super Silver fleet, Chimera. You, being a highly qualified astronaut and government agent, have been sent into space to explore a UFO recently detected from Earth. You soon find that this is hardly what anyone could have expected as it bears the moat remarkable resemblance to a ghost ship.

There is no apparent reasoning behind this alien identity crisis and so you continue to investigate, undeterred. You find yourself in a forced perspective spaceship not unlike the one in past Ultimate efforts. Even movement is robotic.

The plot is straightforward from here on in. You have to go about the ship using a mixture of stealth and lateral thinking to enable the cracking of some problems. The aim is to set up a number of missiles and arm them, in order to destroy the satellite (or whatever it really is). Supplies of food and water have to be renewed frequently, otherwise you may meet your metaphorical maker much sooner than you would like.

At the bottom of the screen there are displays to show how much food and water you currently have, what object you are carrying and heartbeat readout. Water depletes more rapidly when you're near to a radiator (of which there are several).

There are no wandering baddies to shorten your life but there are things like electric fences which suffice for the purpose of ending the game. Many of the items required to finish the game (and others) are hidden from your view to the screen layout, so it's best to have a good wander around. Once the missiles are all armed and ready, you have to get back to a particular room near to the starting location so you can make your escape.

Chimera is an interesting game with a fair few problems to solve. The graphics are well implemented and attractive on screen. One of the best features of the game is the sampled scream sound which will really scare you, first time around. The problems are a little silly and the plot is a vain attempt to disguise a highly derivative product. Considering the price, however, Chimera is reasonable value for money. More games of this quality and this price would not go amiss.

This is only the second Knight Lore/Alien 8 look-alike to appear on the Commodore. Cylu, one of Firebird's earlier releases, being the first. Chimera is definitely graphically and sonically superior to Cylu (the 3D effect is excellent as are the pieces of music and sound effects) but the gameplay is unfortunately just as weak. Having said that I must profess to deriving several enjoyable and absorbing hours of playing and mapping (helpful but not essential). For the paltry sum of £3.95, Chimera is certainly worthy of consideration.

Though not entirely original when compared to Spectrum releases such us Knight Lore or Alien 8, Chimera is one of the first games of this type to appear on the C64, and very impressive it is indeed. The graphics are exceptional - the main sprite is quite impressive, moving smoothly and convincingly in front of and behind the scenery. The game itself isn't bad, though some of the solutions are a bit obscure. After a while you fall into the author's thought processes and things get easier. Not a bad release and definitely worth the budget price asked.

Lastability 61%
...but it does get rather monotonous with four very similar tasks to complete.

Value For Money 80%
An above average game at a well below average price.