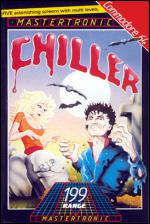 Loosely based on "Thriller", you guide El Jacko around various locations, avoiding spooks, ghouls and other weirdo types found in these places, before turning into a werewolf and ending up in Battersea dogs home howling at the moon and supping Kennomeat.

The first screen is a forest setting, a few trees and several ropes to climb up and down. Once all the magic crosses have been colected you progress to a cinema, then a ghetto, graveyard and haunted house, in that order. At this point you can rescue your girlfriend and cart her back through all the nasty places you've just visited.

This is where life gets complicated, in that you have to control both characters, switching between the two and keeping some distance between them and the spooks, again collecting magic crosses.

While all this is going on we're subjected to a rather dubious rendering of Thriller in the background, not exactly the kind of thing to make you want to jump around the dancefloor like a madman but enough to give an impression. I wonder if the squeaky-voiced person is collecting his share of the royalties on this?

A Michael Jackson-inspired quest for crucifixes, where you control both Jacko and, latterly, his girlfriend... and a dubious rendering of Thriller in the background.