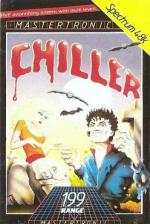 The plot behind Chiller is very similar to the Michael Jackson video Thriller, at least the scenes are the same they're just presented in a slightly different sequence.

The action starts in the forest, rather than in the cinema, and then moves to the cinema, the ghetto, the graveyard and the shack (well actually it's a mansion now). That's about as far as the similarity goes, well it would be very hard to design a game in which the player had to run about singing, dancing and generally Pulling funny faces at the local population. Chiller still has a touch of the old Hollywood horror film, boy meets girl, boy loses girl to the gremlins, boy (this is your bit now) sets off to rescue his girl before it's too late Essentially Chiller is a platform game played over five screens. You start off in the forest and your task is to collect all of the crosses that are scattered around while avoiding contact with any of the ghouls, and that includes just about anything that moves. Should you collide then your energy, shown on a bar line, will decrease. You only have one life so it's important to keep your energy levels high and this is done by eating mushrooms (be careful not to eat the purple ones - not only do they look rather unpleasant but they actually make you ill).

After you have collected the crosses you can move to the next screen but on every screen the task is the same, collect the crosses, eat the mushrooms and avoid the ghouls. If you escape from the forest you must work your way through the next four screens before you have any chance of rescuing your girl. She has rather stupidly taken up a position on the roof of the Mansion. After you have collected the objects and climbed up to meet her you could be forgiven for expecting a break, sorry, no Hollywood happy endings here. You must escape and go through it all again if you want to get home safely.

Points are allocated according to the number of crosses you collect. This is rather curious since there is also a scoreboard which shows how many crosses you have collected. Of course the one glaring omission is the Thriller music, but that's all history now since the row about its use on the CBM64 version.

The one glaring omission is the Thriller music, but that's all history now since the row about its use on the CBM64 version!