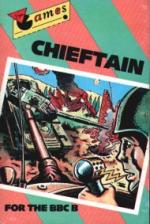 Chieftain is a tank battle game for one or two players Using joysticks, you have to manoeuvre your tank around the battlefield destroying trees and chalets to score points, the ultimate aim being to destroy the enemy tanks.

It all sounds very exciting, but I'm afraid I didn't find it so.

On opening the cassette case and removing the insert I discovered the game was for joysticks only; this should be prominent on the outside of the cassette to avoid wasted purchases.

The insert also gives further brief instructions and a screen photograph of the 'action'.

The screen display features trees, mountains, chalets, lakes and a time-shift tunnel, but is unimaginative. Character graphics are employed with no use of multi-coloured shapes.

The 'tanks' only appear as either blue or red rectangles with a protrusion representing the gun. The whole program is written in Basic and consequently the action is jerky and fairly slow - certainly not up to the standard we have come to expect for the Beeb.

With all the hullabaloo surrounding the launch of Virgin Games, I would have expected something better than this.

I expected better... It's written in Basic, the action is jerky and it's fairly slow - certainly not up to the standard we have come to expect.