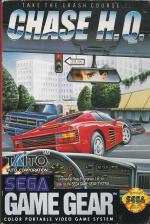 Released into the arcades in 1988, Taito Corporation's Chase H.Q. was one of the most popular driving games, offering the kind of high-octane thrills that only the coin-op could provide.

Inspired by hit 80s cop show Miami Vice, players must put pedal to the metal and use their souped-up pursuit vehicle to hunt down nefarious criminals, then batter them into submission until they eventually pull over.

The prospect of trying to distil a game designed for powerful, custom arcade hardware onto 16-bit gaming consoles proved difficult enough, so trying to create something that could run on Sega's ageing 8-bit consoles was a pretty big ask.

Surprisingly, Taito did a remarkably fine job. Their conversion retained the core game mechanics from the arcade, and featured a fast and fluid rolling road routine, chunky-yet-detailed graphics and responsive controls. There's even an autopart store that allows players to upgrade their vehicle with extra turbos, a reinforced bumper, or even a supercharger that helps close the gap with those petrol-head perps even quicker.

When it comes to choosing between the Master System and Game Gear versions, the latter is the better of the two. The Master System is optimised for PAL regions and is limited to a 50Hz refresh (and doesn't work particularly well with NTSC hardware), whereas the Game Gear runs at 60 Hz, offering a smoother experience overall, as well as improved UI graphics.