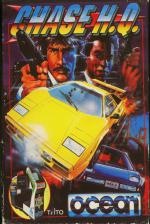 The Police radio crackles into life as you speed down the freeway in your black turbo Porsche. "This is Nancy from Police Headquarters. Suspected multiple murderer heading west out of the city in a white British sports car. Intercept and arrest."

Pausing only to stick a flashing red light on top of the car and switch on the police siren, you stick your foot to the floorboards and belt through heavy traffic to catch the criminal before he escapes...

And so begins Ocean's conversion of the brilliant Taito police chase arcade game, which gives the player the chance to join a side of the Police force which makes Miami Vice look rubbish... Chase H.Q.

The specialised skills you need to be a hero in this elite branch of the boys in blue is the ability to zoom through traffic at high speed, track down villains driving very fast cars and smash them off the road before they reach the state line and freedom - if you can't do that, it won't be long before you're slung out of the force.

At the start of each level you're given the description of the felon and the car he's driving. After that it's time to leap behind the wheel of your car and weave through the traffic in hot pursuit. The highway twists and turns, and you've got to avoid hitting other cars (which slows you down) if you're going to catch the speeding villain within the time limit. Sometimes there are forks in the road, and an arrow gives you a few seconds' notice as to which is the quickest route - miss the right one and valuable time is lost as you tear down the longer road. It's at times like this when you wonder whether to use one of your three turbos to give you an extra boost of speed, or whether to save them for when you find your quarry...

When the criminal's car is in sight, extra time is added and you've simply got to run it off the road by repeatedly smashing into it. Every time you hit the villain's car, one point is added to the damage meter at the left of the screen. When the meter is full, he slows right down, giving you the chance to pull up alongside and bust him.

After that, it's back to headquarters to wait for the next mission - an even tougher villain driving an even faster car!

I love the arcade version of Chase H.Q., and am pleased to see that Ocean have transferred the game to the ST, Amiga and Spectrum perfectly.

On 16-bit there's plenty of speech, great sound effects and music, and colourful and effective 3D graphics. More importantly, the gameplay is superb; tough enough to keep you glued to your screen as you race after the elusive next car, yet highly addictive as you always seem to get just a little bit further with every go.

The sounds and speech are lost on the Spectrum version, but the graphics, although monochrome, are fast, smooth and very impressive indeed, with great sprites, highly effective 3D and superlative gameplay making this the most astounding Spectrum game for years.

A stunning conversion of the all-action crashing, smashing, car-trashing police chase game which contains all the thrills and spills of the original machine.

Simply astonishing. All the features of the arcade game come together in the smoothest, fastest, most exciting Spectrum game seen in years. It gets my vote for Spectrum Conversion of the Year - if you miss it, you should be locked up!!

The gameplay is superb; tough enough to keep you glued to your screen as you race after the elusive next car, yet highly addictive as you always seem to get just a little bit further with every go.