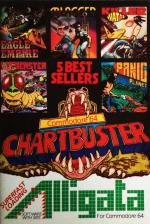 I have often wondered what software houses do with their products when sales tail off. Now I know. They bring out a compendium.

Blagger is a tricky graphical adventure of very good quality which is good for many hours of frustration. Killer Watt is more bizarre and involves flying about a cave system shooting light bulbs, fish, clockwork ducks and other weird creatures. The first screen is nice and gentle, but the rest are appallingly tricky... good fun.

All games are turbo-loaded and are of a good standard. I did note that one side of the tape showed the usual poor Alligata duplication but fortunately the other loaded well. The games performed well.

Overall, an interesting assortment which, at £2 a game, compares very well with the budget game sellers.

Overall, an interesting assortment which, at £2 a game, compares very well with the budget game sellers.