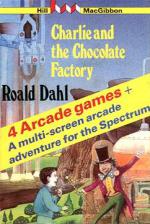 I think you could justifiably criticise Hill MacGibbon for the blurb they put on the cover of this software and book combination. They say that the cassette includes four arcade games (which are on side one of the tape) as well as an arcade adventure game (on side two). But, when you load side one of the tape, there is only one program on there, not four.

So what you are really getting is a single game with four screens. I suppose I'm being a bit picky, but on the other hand, I don't think anyone would describe Jet Set Willy as being sixty separate games just because it has more than sixty screens, so I do think that Hill MacGibbon are being misleading by describing side one of the tape as four separate games.

I wouldn't mind so much, but these four 'games' are all very primitive, being just one step above space invaders. Each game is based upon a character from the book (Mike Teavee, Augustus Gloop, and so on) and, apart from the Augustus Gloop screen, they are all standard collect-the-object-avoid-the-monster games, with small, flickery graphics.

You are supposed to finish all four of these, and collect a code which will allow you to enter the 'incredible 43 room arcade adventure' but, frankly, I found them all so boring and unaddictive that I gave up and played the game on side two by using the cheat mode. This cheat mode is a good idea, giving you infinite lives, but not allowing you to finish the game completely. If only the game itself were as good. Unfortunately, it's just the usual platform and ladders formula - again with fairly poor graphics. It's not a bad platform game actually, and with better graphics would probably make a good budget game, but for £9.95 it's lousy value, even with the book and the our screen on side one, thrown in.

What's more, I thought that the term 'adventure' implied that a game involves some manipulation of objects as well as just good timing and reflexes (which are arcade skills), in which case calling the game an arcade adventure is also a bit misleading. I suspect that Hill MacGibbon's marketing men have picked up a bit if software jargon and gone overboard using it in their claims for this package.

I don't want to be totally negative about this package (honest!) and I do think that attracting children to books via computer games is a good idea, but it has to be done properly (the way that Melbourne House did The Hobbit, for instance), and, frankly, the software in this package just doesn't do justice to the book.

Attracting children to books via computer games is a good idea, but it has to be done properly... Frankly, the software in this package just doesn't do justice to the book.