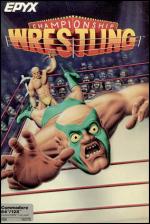 Grab your partner for the latest sports simulation from US Gold

Eight grappling greats of the American West arrive on the computer screens to crunch, mangle and maim their opponents in an attempt to win the World Wrestling Title.

The contenders for the title are the biggest, baddest bruisers of professional wrestling who know all of the 25 regulation wrestling moves and a customised one of their own. You can play any of these gripping grapplers in either a practice boot or against the computer. You can also arrange a knockout tournament for up to eight humans to decide who is the King of the Ring.

Before each bout, the screen is dominated by a close-up of the combatants as they snarl their motto (in wrestling terms this means threat). These range from the subtle "I'll rip off your ears and feed 'em to ya!" (K. C. Colossus) to the incredibly meaningful "Haaarggh! Oooorowrrr.... Killl!" (The Beserker).

Then it's into the ring for the three minute bout. The scene is set for the match as a capacity crowd prepares to hurl support, abuse and bottles at the grunting grapplers as they pummel each other into submission.

The contest is scheduled for a full three minutes but since only one fall is required to win, it's usually all over within the first twenty seconds.

Your first opponent is usually an Indian brave who's definitely on the war path. His motto "Scalps? I'm talking heads!" should give an idea of what Howling Brave has in store for you. His custom move is the Bow and Arrow which is an incredibly painful arm twist and kick that will stake you out on the mat.

Obvious joystick moves control the actions that are structured so that you only have to move the stick in the usual four directions. The actual result depends on whether you are near your opponent, further away, have him in a headlock or if he's flat on the canvas.

It's best to start the bout with a few punches and kicks to soften up your opponent. These don't score very much but they weaken him enough to allow you to get close enough for the real bone-crushing blows. These also include the spectacular spin kick and flying drop kick that can land you in trouble if you miss. They're usually worth the risk as they score more points and can often prove to be the decisive blow.

One you get your opponent in a headlock, you can drop him on your knee for an atomic drop, hurl him across the ring in a body suplex or pick him up to take him for a spin. Then you can simply drop him on his head for some heavy duty demolition work known as the pile driver, get him nice and dizzy in an aeroplane spin before slamming him on the mat or throw him out of the ring and into the jeering crowd.

When he's flat out you can add to his misery and bruises by planting your leg into his face in a leg drop before going or the pin-fall.

You can add to the fun and your score by climbing onto the ropes to try a flying (turnbuckle) kick or punch. Get it right and you'll score heavily against a weakened opponent but if you miss you could be out for the count.

The strengths of both you and your opponent are shown as red bars in a display above the ring that also includes the clobbering time left in the bout and the comparative scores. Simple moves such as headlocks, punches and kicks score only a few points so you will have to inflict airplane spins, dropkicks and turnbuckle punches and kicks on your hapless opponent if you're going to impress the crowd.

To score big points, you must complete your own custom move. This can only be attempted when your opponent is all but flattened and you're still fighting fit. Then simply selecting a right headlock will produce a spectacular move resulting in a win and lots of points for you, cheers from the crowd and a headache for your opponent.

Your fight continues from opponent to opponent until you either cream them all or are finally flattened. Then if your score is good enough, it's recorded as a World Record.

It is inevitable that Championship Wrestling will have to grapple with Melbourne House's Rock 'N Wrestle to see which grabs the grappling groupies.

I found Championship Wrestling to be the easier game to play and graphically more impressive. Championship bouts are dominated by kicking moves and then usually finished off by a spin. In Rock 'N Wrestle the headbutt (missing from Championship Wrestling) produces results against ten (that's two more) opponents. Championship Wrestling also allows tournament play between eight humans and also features a World Record table of the top eight scores and a custom move for each competitor. Rock 'N Wrestle more than makes up for this with two more wrestlers, a bopping soundtrack to pummel your opponent to and more wrestling moves, including the headbutt and bonecrunching backbreaker.

All things considered, the result could only be a draw between two outstanding games that are far better than the sport they simulate.

An easier game to play than Rock 'N Wrestle and graphically more impressive.