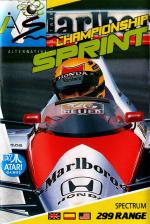 Remember Super Sprint? It was crap. Utterly. It was one of those birds-eye view 'race around lots of different Formula One tracks in a piddly little car' things which was really good in the arcade - but on the Spec? As I've said. Crap. You just couldn't tell what was going on, the controls were dodgy and it was practically the same as Grand Prix Simulator from CodeMasters - which was about a fifth of the price (and which everyone bought instead).

Then came Championship Sprint - essentially exactly the same as the Super variety, but this time with a special track editor which meant it was stacks more fun if a trifle 'over-priced'. And here it is again - and it could be yours for the snippish snip of £2.99.

But would you want it? I'd say - well, perhaps. The editor is definitely the best bit. It's easy to use - you moving an arrow about and pressing Fire. It's a bit like building a Scalextric set really. This is the only good bit, mind - the graphics are still puny, the controls dodgy. But at a mere three nicker it all seems a lot more reasonable, so maybe this could be for you.

The editor is definitely the best bit. This is the only good bit, mind - the graphics are still puny, the controls dodgy.