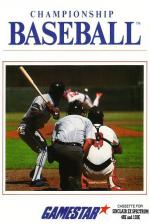 Hi there, fans, and welcome to the old ball game where it's one, two, three and you're either out or on strike or something... Help! Can anybody explain the rules of baseball to me?

The first problem with this game is that the instructions presume that you know the difference between a 'Slider, outside corner' and a 'Hard knuckler, inside corner'. The only way to understand the thing is to actually play it a few times, after which it may all make sense... or you might just prefer to look for a decent cricket simulation instead!

Providing you do persevere, you're presented with a neat overhead view of the diamond which splits at crucial moments to give you an over-the-batsman's shoulder shot, so that you can slug away or pitch those Screwballs. It's by far the neatest solution I've seen to any sporting simulation and really gives you a feel of being there.

So it's Hughes at the base and the pitcher is all wound up to send a ball spinning down. Actually, apart from the aptly named Fastball, movement seems to be a little slow, but at least it gives you time to respond. All you have to do is press the fire button at the right moment.

If you get a hit, providing it's not a home run, the equivalent of scoring a six, you automatically charge for the first base. After that you can choose to run on, and you can run back if you don't think you'll make the distance, or slide to get home in time. When you have men positioned on the bases, you take control of whoever's furthest round.

Once your team is out, which means they've all got home or failed to make a run after three attempts (unless the final attempt is a foul - are you following all this?), it's your turn to pitch. You get a brief rundown on the batter's strengths and weaknesses, then choose your pitch by pressing fire and a direction on the joystick.

As with so many sports simulations, the computer now takes a hand and gives you control of the fielder who's nearest to the ball s path. Once you've caught it you can throw to any of the bases to try to intercept a member of the batting side who's between bases. I hate this system in soccer games, but in baseball it seems to work much better as it's obvious who should be following the ball.

And that's really all there is to it, with each side slogging away through nine innings or overs or whatever our former colonial cousins call them. You can play either the computer or a human opponent but you have to provide your own popcorn and Pepsi.

Apart from the obscure nature of the game itself, the only other major hazard appears to be the chameleon-like character of the fielders, who change colour whenever attributes clash. It shouldn't cause too great a problem but it does point to the game's non-Spectrum origins. The white ball can be a bit hard to spot at times, too.

Gamestar is recognised as the major producer of sporting software in the States, and on this showing it's easy to see why. But I'm not sure how much attraction this will hold unless you're a US expatriate or a fan of the game.

A clever sports simulation let down slightly by the Spectrum's limitations and the obscure nature of the game.

A clever sports simulation let down slightly by the Spectrum's limitations and the obscure nature of the game.