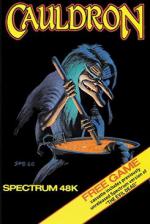 On a hill many miles away there is a green door behind which there is a Golden Broomstick, a thing so powerful that the it is sought after by the best and cleverest witches in the land, but only you are prepared to face the dangers that lie behind the door. It's not that you are being particularly brave but you have this spell that should defeat the powers of the pumpkin's room and leave you, as a prize, with the witches' golden broom.

Your spell needs six basic ingredients not normally found on supermarket shelves, in fact they can only be found behind other coloured doors for which you will need the coloured keys. So your first task is to find the keys by flying on your own tatty broomstick round the locality. The keys can commonly be seen propped up against trees all that remains is for you to land and pick them up. As you peruse the skies you are attacked by all manner of things. Witch-eating bats, cloak-scorching fireballs, murderous pumpkin and badly behaved seagulls are just a few of the hazards facing you. Of course your magic defends you from their onslaught (witch is to say that your broomstick is actually a 4.5mm quick-firing cannon) but your life force is depleted by as much as four or five points. However by firing directly at the attackers will only cost you one point per shot so since each of your eight lives (or hags) only have 99 points to start with you really can't afford to be flippant.

With the correct key you can get into any of the caverns although you will have to discover for yourself which caverns to visit first. Each cavern presents a sort of platform game problem that requires great skill and dexterity to negotiate. When you have reached whatever it is that you are looking for you must return home to add it to the pot. After collecting the six main ingredients you will be able to complete the spell that will rid the land of the pumpkin and win that new broom.

As a bonus, on the B side of the cassette is a Spectrum version of the earlier Palace game, The Evil Dead.

After collecting the six main ingredients you will be able to complete the spell that will rid the land of the pumpkin and win that new broom.