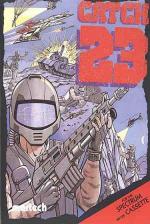 Intelligence reports have shown that the enemy's CK23 orbital interceptor is now operational! The CK23 is a masterpiece of machinery. It can take off and land like any ordinary aircraft, but it can escape the earth's gravitational pull and obtain geostationary orbit wherever it wishes.

Staying in orbit for weeks, maybe months on end, it lies in wait till an enemy ship dares enter its territory. Then the CK23 blasts back into the atmosphere to intercept and destroy the intruder using highly sophisticated lasers and missiles.

Your mission is to find the site where CK23 is being developed, hidden in a top-secret military complex in the mountainous area of a small island. The heathland around the complex has been planted full of mines, deadly dangerous high-voltage electric fences and surveillance cameras. Armed military vehicles and foot patrols guard the base.

Once inside the complex, you must steal the plans, set a time-delay bomb in the nuclear reactor and get off the island as fast as possible. It's difficult, but there are a few items to help you in your 3-D vector-graphics mission.

A special shuttle service was once built so the island's inhabitants could get from place to place faster. Only the main shuttle routes have been included in your map, but if you can find the connecting routes you can get around very quickly.

Dotted over the island are derelict houses and buildings. Many have been sealed up by the military forces, but some are still open. If a door is present, then the budding is open to you. Inside the buildings are supplies of ammo, batteries for a mine detector and explosives for making bombs.

Included in the screen display is a dangerometer that goes up and down according to peril you're in; there are, a host of surprises around every corner in Catch 23 so it's vital you stay alert. Don't just sit there, grab that gun clip and go get them plans!

'Catch 23 is a marvellous piece of programming but a pretty unaddictve game. It has two very different elements - there's thoughtful exploration and mapping, and then suddenly member of the opposition will pop up from nowhere and you're plunged into a quick-on-the-draw scene. This continual switching is irritating and, in practice, doesn't add any atmosphere. Catch 23 may attract some attention, but most of it will be short-lived - the game didn't hold my interest for than a few hours.'

'Lately, Martech seems to have come up with a different kind of me in every package it releases. This is a great, brave policy - there are bound to be a few bad eggs. The idea of Catch 23 is strong, but it's let down by some very slow-moving graphics (probably the computer's fault and not the programmers'). All the buildings are well-designed, and the atmosphere is involving - but Catch 23 lacks fast action. If you must get this to keep you busy till Mercenary, do it. But don't expect anything nearly as good.'

'Catch 23 has quite impressive graphics, but their appeal wears off after a few minutes. The high price is off-putting, and the game isn't exactly def.'

Catch 23 has quite impressive graphics, but their appeal wears off after a few minutes.