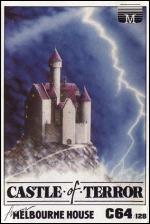 Melbourne House's Castle Of Terror really shows how far graphics adventures have come in the past year. Although the subject matter is pretty unoriginal, the presentation is superb. Spooky music plays in the background, animated figures feature on some of the screens, and the design of the game as a whole is really excellent.

You start in a village outside Dracula's Castle and must prepare yourself for a mercy mission into the vampire's parlour to rescue a fair maid. OK, I did warn you the plot wasn't exactly the most original I've seen, but to Melbourne House's credit the game is good enough to stand in its own right. There are some very tricky puzzles as well, so you're in for a tough time.

The graphics don't just look pretty; they're also functional. You'll have to examine the screens reasonably carefully to find that the program doesn't understand many of the objects you can identify. Some of the locations involve some interaction with the other characters but don't expect any complicated conversations - though you'll get to hear a story if you're prepared to pay for it.

I haven't covered all the locations in Castle of Terror yet, but there don't seem to be an enormous number. Some of the puzzles are quite nicely thought out, though there are moments of confusion, particularly concerning the object you need to enter the castle with, which seems to undergo a change of identity once it enters your inventory.

There are no serious Hobbit-bugs here however, and a lot of good programming features - the pictures draw rapidly, the response times are very quick, and if the program doesn't understand your input it does you the favour of telling you which word it's having trouble with.

Don't let the lack of originality put you off - Castle Of Terror is up to Melbourne House's usual high standard and well worth a look, even if it is a bit pricey.

Castle Of Terror is up to Melbourne House's usual high standard and well worth a look, even if it is a bit pricey.