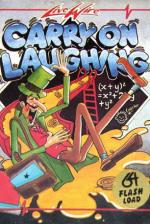 This is another variant on the general theme of platform games. In it you take the pan of Mr. Livewire, the caretaker of St Hexadecimal's, a school with more than its fair share of delinquents. Your task is to clean away graffiti, in the form of crosses, from the walls whilst avoiding the usual nasties.

There are nine screens depicting different areas of the school and arranged in a three by three array. Each screen has its own problems and requires different tactics. Some screens aren't particularly imaginative or new - there is a Kong style screen in which you must avoid rugby balls rolling down a series of platforms. On completing a screen you can move to the next of your choice, and you can repeat screens if you so desire. All screens require the usual combination of planning, timing and dexterity. There is not, however, a single solution to any screen, so you can ring the changes if you want.

Graphically the game is competent with reasonable design of figures and passable animation. The background music is well arranged albeit with the odd off note. Several lengthy pieces are played with sufficient variety to reduce monotony. The play is interspersed with the usual bells and other noises.

Overall, not an earth-shattering game although it's not that bad. The review copy gave unpredictable loading and there were occasional bugs which gave unexpected results during play. At the price, give it a try, you might like it.

The game is competent with reasonable design of figures and passable animation.