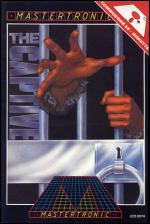 This is the second arcade adventure to come from Mastertronic and is the follow-up to (strangely enough) their first offering, Spooks. It looks very similar to Spooks and follows the same sort of approach in both format and play. This time however, you find yourself lost deep in the Glen of Coloured Corpses from which you must escape - Coo!

The playing area is of large proportions and scrolls in eight directions as only a small part of this playing area is shown on screen at one time. The locations display is at the top of the screen while a set of selectable actions available, along with any objects carried, is displayed on the lower half of the screen.

The game starts in a small town but through exploration you discover forestry, a river, a graveyard, and a castle! The view is of a near plan-view with yourself and any objects/nasties displayed side on (as in Spooks). You can walk freely around the 'island' and its dead-ends, but there are 'doors' that can only be passed if you're carrying the correctly coloured key and there are nasties that pop up in the form of the Messengers of Doom. These appear, move a bit, then disappear just as swiftly and are deadly to the touch.

The keys, amongst many other objects, are scattered about the island and can be picked up. Only three objects can be held at one time though. There are quite a few objects to be found and utilised correctly, including a crucifix, a gun, a shovel (very handy!), mushrooms and even a helicopter! The helicopter, as well as the gun, once found cannot be used until the correctly filled out scroll is carried. About the landscape there are several scrolls and on each there are words to the effect of 'This certifies that (your name to be typed here) is able to use a (object, eg gun)'. This introduces a new feature over Spooks in the form of abilities.

Pressing the fire button on the stick enables you to select one of seven actions - DO NOTHING (in case you selected the action by mistake), PICK UP AN OBJECT, DROP AN OBJECT, USE AN OBJECT, QUIT GAME, ABILITIES (perform a specific ability), and STOP USING (an object/ability). To pick up an object, you simply move over the required object, press the button, select the PICK UP AN OBJECT option, and select in which of the three positions you wish to put the object in. The same sort of thing applies with dropping an object, using one, and stopping using one. If the QUIT GAME option is selected a countdown to the end of the game begins, which can be stopped by pressing the button.

There are also items of food about the plains that can be picked up and 'used' (i.e. eaten) to gain extra energy, which feverishly ticks its way down in the bottom right of the screen. Should this energy reach zero, or should you run into a Messenger of Doom, then the game is over and your score is displayed along with the high score.

I enjoyed playing Spooks and I found Captive just as, well (dare I say it) captivating. The graphics and sound are as poor as Spooks, but it doesn't really matter as the game is a good one. There are some nice touches which help it along, such as the helicopter and the scrolls (abilities). It may not appeal to all arcade-adventurers due to its apparently simplistic nature, but it's one that you should give a go as it is quite tough and fun to play.

Presentation 65%
Average packaging but easy to use playing options.

Sound 38%
Rather poor and grating tune.

Overall 61%
By no means outstanding but still pretty good.

By no means outstanding but still pretty good. Fairly simple with minor detail and passable scrolling.