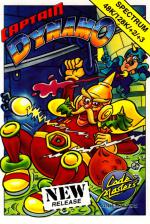 He's faster than a speeding bus, more powerful than an old lady in a post office queue and can leap tall doorsteps with a bit of a push from Cousin Geoffrey. He's Captain Dynamo and he's here to save the day. Hurrah!

First of all, a bit of good news for 48K owners. Last month i told you that Dynamo is a 128K only game. Well it isn't. I'm sorry, but lately I've found it that little bit harder to think clearly. Doctor Bobbins says it's probably the first signs of juvenile dementia, but personally I think that. um, well you know... Ooo, look at Bert everybody! He's sort of sitting on a twig and wobbling. That's clever. Now where was I? Oh yes, Captain Dynamo isn't a 128K only game - 48Kers can play it perfectly well, just missing out on the music and some sampled speech. So dash off to your teetering covertape and play that Dynamo demo. Done that? Good. On with the review.

You should all know the plot by now, but if you don't, tough. It's so feeble that I can't be bothered repeating it. Suffice it to say that you, as Cap, have to amble around the place, rescuing your gal's diamonds from a loony old villain. There's some nonsense about a rocket ship waiting at the end of the game, but let's not bother with that, eh?

The game is a vertically-scrolling affair set over twelve levels. There are about fifty diamonds on each one, but thankfully you don't have to collect them all. All you have to do is survive long enough to reach the end of the level, where a fizzing transporter is waiting to zap you into the next cavern. Do this twelve times and you've beaten the game. Mind you, this is like saying learn to stand up without falling over and you can skateboard. There's a lot more to playing Dynamo. A whole lot more. It's all about skill, it's all about timing, it's all about having a good sense of balance. It's all about wearing natty shorts, its all about frightening old people as you whizz past them in shopping precincts. Or something. Sorry, what was I saying again?

I'll be forgetting my own name next. But back to Captain Thingy. Each of the levels is cunningly constructed to give you no chance whatsoever of beating it. Okay, maybe I was exaggerating a little. It's just that the vertical scrolling has this nasty habit of hiding what's lurking above you. The only way you can find out what's up there is by jumping up to meet it. Ve-e-ery sneaky. Fortunately, you can defeat the nasties that scurry and slurp their way around the platforms by jumping up and down on their heads until they get a bit fed up and go off to the library. Eee, the library. You can always get a nice warm newspaper and a cup of tea from that nice lady behind the counter... sorry, seem to have wandered off the point a bit there.

Some of the platforms are too far away to reach. Luckily, there are booster pads scattered around the place. Bounce on 'em and you're hurled upwards at the speed of sound, crashing through barriers, walls, ceilings and Walthamstow, usually ending up in a spike trap. I once went to Walthamstow you know - it rained, and my sister Madge felt a bit under the weather, what with her bunion and Uncle Ned's strange kidney problem. That reminds me - there are some problems with the game. For a start, it's quite a slow little number. Fair enough, the graphics are really snazzy, with some stonking animation. The Cap sort of rolls along, his cape flapping behind him as he attempts to balance his rather large stomach. It's really rather funny - just a shame it's that tiny bit too slow. Happily, once you adjust to the pace of the game, everything's fine. The thing is, that initial annoyance is tough to overcome.

The other major problem with Captain Dynamo is that it's far too hard. You get just three lives, and no credits, so the gameplay's an all-or-nothing kind of thing. With the number of traps and baddies pitted against the Cap, getting beyond level Three is a real challenge. Having said that, leaping around the platforms and dodging the bad guys is brilliant fun and more than a wee bit addictive. And the one really nice feature is that you can collect the restart points liberally dropped around the levels, and so choose where to reappear when you get clunked. Hurrah!

So. Captain Dynamo. It's not quite a Megagame, but a startlingly lovely platformer all the same. Oh, just one more thing, and I think you'll find this highly amusing... no. sorry, it's gone clean out of my head. Ooo, look at Bert everybody! [There, there! - Ed]

A colourful, bouncy, groovesome platformy sort of thing that's a tad too hard for its own good.

Not quite a Megagame, but a startlingly lovely platformer all the same.