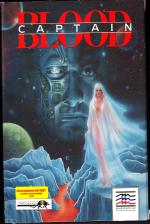 Bob Morlok was a struggling computer game programmer who worked under the pseudonym "Blood". Work and ideas were very scarce, meaning that pay-cheques were very few and far between, until one day he met an author named Charles Darwin. After a short conversation in a bar. Darwin convinced Blood that alien races were monitoring earth's computer games and wished to invade and take over before the games had learnt enough to repel any attacks. Before Morlok had any chance to get any further explanations from him, Darwin hurriedly left, leaving Morlok to ponder the relevance of their discussion.

Four days after, Morlok had an idea. He would program an exact simulation of the situation in order to try and discover a solution to the problem. After weeks of coding and data testing, the program was ready to be run.

Suddenly, as Morlok tentatively typed in the command, he vanished.

Moments later he found himself sitting in a padded command chair, wrapped up like a mummy.

A searing pain cut through his brain as he changed from an initial computer creation to a super-intelligent being. At that moment he recognised that he had become his own game character. He had become "Captain Blood".

Noticing an attack pattern on his scanner, he used the hyperspace to escape. However, this caused 30 clones of himself to be created and scattered over the galaxy. The creation of these clones sapped vital fluids from Blood's body. Guess what? These clones must be found...

You take the part of Blood after he has found 25 clones: five more have to be reached before he dies. You must search the galaxy and talk to the inhabitants of various planets to find clues to the whereabouts of the remaining clones.

Some aliens may be helpful, some may be hostile, but you should be able to discover which is which by use of a set of icons which may be used to interpret most alien languages.

But choose your words carefully, or the search for the clones may become immaterial!

When I saw Captain Blood on the Atari ST, I didn't think that it would work at all on the 8-bit machines, but I must admit to being rather surprised at how well it has actually travelled across. It's not quite up to the standard of the 16-bit version, but you can't really expect it to be, can you?

There is a fair amount of data pulled from disk, so I can see tape users feeling fairly crippled by this. I did find some bits quite boring, however, and got quite frustrated when one alien kept saying "Go Planet - Free Brain Spirit".

What the hell is that supposed to mean? It could be a strange French to English translation, I suppose, but it's hardly helpful. Despite the fact that the programmers have made quite a good conversion, the game still isn't that great.

I think the actual concept of Captain Blood is excellent, but it's not that well executed on the C64. The palet graphics are nice, as you sit there rotating in space, but some of the graphics are rather blocky and the animation is a bit jerky at times.

The sound and music aren't too great either with a disastrous title track rendition of Jean Michel Jarre's Ethnicolor I.

Another problem is the loading. I noticed a lot of disk access going on when I played, and loading data from disk rather than progressive levels is going to cause havoc when the game is put on tape. The best thing about Captain Blood is that it is available on 16-bit, which makes for a faster and more enjoyable experience.

I suppose it's the concept of this that grabs me - but I think it's pretty good! Of course you can't have the speed of the 16-bit machines - either vector graphically or in terms of disk-access - but this has certainly managed to capture the flavour of its big brother versions.

The language problems don't bother me much - just look on it as an alien environment where translation is never perfect (it also adds a puzzle-solving element) and you're into the atmosphere of the game.

But be careful, Captain Blood is an acquired taste - and I'd definitely recommend you at least try it before you buy (especially if you're going to buy the cassette version because I don't hold out much hope for the loading system.

Presentation 68%
A novel communication system, but a poor loading method.

Graphics 70%
The 3D sections are nippy enough and the ship interior is quite nice, but it does look a bit drab.

Sound 31%
Poor effects and an abysmal JM Jane working on the title screen.

Hookability 52%
It's really hard to get into.

Lastability 79%
If you manage to get into it, it will take you a while to search out all the clones.

Overall 77%
Not a bad game at all, considering, but it could have been better.

The 3D sections are nippy enough and the ship interior is quite nice, but it does look a bit drab.