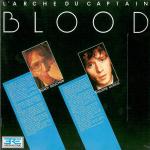 Travelling through hyperspace can be a hazardous business, especially if you have to enter it hastily and without preparation. Captain Blood will definitely agree here because he had a simple choice - die at the hands of hordes of hostile aliens or get out of there fast. He chose the latter and, because of a malfunction in his spaceship, Blood was not the only one to re-enter normal space at the end of the journey; thirty clones appeared throughout the galaxy.

In the next 800 years Blood travelled around the galaxy finding his clones and eliminating them - after all, one Blood is enough for anyone. Now there are only five left to find, but things have not been too good for Blood either. The cloning process had deprived him of large portion of his vital fluids. For each of the clones that he'd found, some of his vital fluids had been replaced to let him keep on living. Time was running out though, he couldn't survive for much longer with a single clone left in existence.

There are four main screens that can be accessed during the game: a view of the planet that you are currently in orbit around, a view through the eyes of the oorxx (a baby spaceship-type being), a map of the galaxy and the alien communication screen. The planetary view screen just lets you watch it spin on its axis, but it's also used in the destruction sequence. The galaxy map has an overhead of view of the galaxy and you select your destination by letting your finger do the walking.

The oorxx is used to either destroy, photograph or land on the planet - it all depends which variety you launch from your ship. Your first choice will probably be a landing because you need information. There are lots of planets out there and you don't have time to destroy every one of them. Your oorxx is launched and you then have to guide it to an alien. For some strange reason, all of the aliens in the galaxy live at the end of canyons and so you have to pilot the oorxx towards them. Some planets are defended and so you have to fly at low altitude to avoid the missiles. When you reach an alien, the view will switch to the communication screen.

The alien will then start to speak to you and the universal communicator will be needed to translate what has been said. To find out what the symbols mean you just have to move Blood's finger over the symbols. When the alien has run out of things to say, you can speak back to it using the same symbols. There are many different aliens and they each have their own personalities. It is possible to teleport the aliens onto your ship, but only if they're willing. The aliens may give you information only after you've done something for them, like destroyed another planet or taken them somewhere. Information is in the form of the coordinates of a planet.

Travel from planet to planet is via hyperspace and upon arrival you again get a view of the new planet. The process is repeated until all of your clones are destroyed or you degenerate and die. The destruction sequence is activated when you send an explosive oorxx onto the planet. It speeds up its rotation and then explodes dramatically.

Sound in the game is limited to only the occasional spot effect, but there is a futuristic piece of music played on the title screen. Graphics are the strongest point though; the galactic map is excellent and the other screens that crop up are of a similarly high standard. Each of the aliens is well animated too.

Initially you may be confused when playing this because you won't know what to say to the aliens and as a result you'll come to a dead end. After a few games though things will begin to slot into place. Conversing with aliens is fun, but there are not that many possibilities in what you can say. It all boils down to zooming around the universe trying to find your clones and then blasting them into lots of little pieces.

Captain Blood is a vast improvement on recent Infogrames products, but still lacks a little something in the gameplay department.

Destroy one of your clones.

It's certainly a very impressive collection of graphic sequences to delight the eye. The gameplay is slightly more difficult to cope with. The flying sequence is the only arcade action; most of the game consisting of learning the art of alien conversation. You may find it becomes stale after a while, but it's a very novel game structure which will intrigue and delight many.

It loses a lot of the graphical appeal in green, but there are no problems playing the game.

Staying Power 78%
P. It's a long term task to fly around the universe clone bashing.
N. Somehow I doubt that you'll play it again once you've done it though.

Overall 81%
P. Infogrames seem to have got their act together again, perhaps their next game will be even better.

Captain Blood is a vast improvement on recent Infogrames products, but still lacks a little something in the gameplay department.