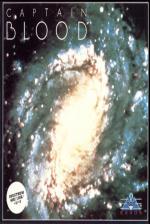 The world is under siege from aliens, they linger everywhere, constantly attacking humans from their bases in Spectrums, arcade machines and even PC Engines. But programmer Bob Morlock has decided to stop them. He's programmed Captain Blood, a hero based on himself, together with a starship.

But when Morlock runs this program he is transformed into Blood, and soon under attack from Space Invaders. A quick hyperspace seems in order, but the drive unit malfunctions, creating thirty Blood clones, all with a portion of his vital fluids! So before taking on the aliens, Blood must first find all his clones. When the game starts 25 have been found and absorbed.

When you takeover Morlock's quest the first thing you notice is the excellent presentation, clearly inspired by the movie Alien. Operating this biomechanic display is done by using Blood's hand to click on icons. Options include looking at the planet's surface (to detect missiles), blowing the planet up, hyperdriving to another planet, saving the game or launching an Oorxx biomissile. In the latter case the player is given joystick control of the missile as it zooms across a wireframe landscape towards a canyon. This is the only arcade section in the game and is impressive.

At the end of the canyon, an animated picture of the alien appears together with a scrolling strip of icons. When the alien talks icons appear which, by pointing at them, are translated into words. You can reply by selecting icons at the base of the screen. There is always an alien on the first planet, but with tens of thousands of planets and only a handful of aliens, it's vital you convince the first alien to give you the coordinates of other aliens. The basic idea is that you warp around the galaxy, talking aliens into giving you the locations of the clones. Some demanding game which deserves serious consideration.

'The first time I played this was on the Atari ST and to tell you the truth this version was not all that different. Some of the edge has been taken off the graphics, but the game's 'feel' has been perfectly translated and playability remains the same. The icon communication system is a bit strange though, with loads of icons, one even representing bananas! This is very off-putting at first but once you have learned the basic icons you can begin to speed the system up. Captain Blood will without doubt take some time to get into but if you can persevere it should be rewarding.'

'Captain Blood is one of those games you either love or hate. Personally I like it. If you play it in the dark you can really get into the unique atmosphere of the game. The version we played was the +3 disk game, and while apart from the music intro it was just one load, I don't know how it'll be crammed into 48K machines.'

Captain Blood will, without doubt, take some time to get into but if you can persevere it should be rewarding.