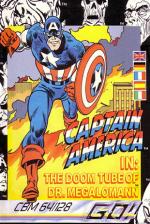 Captain America's foe, the mad Dr. Megalomann, has issued a grim ultimatum: submit him the Presidency of America or suffer the consequences of an exploding underground germ missile!

With the fatal deadline only an hour away, Captain America is called upon to enter the multi-level bunker, better known as the Doom Tube, and neutralise the missile before it releases its contents.

The whole Doom Tube is contaminated with the toxin, the concentration of which increases towards the bottom of the shaft. Captain America only operates safely on levels with a lower toxin level than his immunity count - entering a room to the contrary proves rapidly fatal.

The Tube is inhabited by robot guards who fire upon the hero. Mr. America isn't defenceless though, and has an armoury of six shields which destroy the aggressors on contact. If a shield is thrown correctly, it returns to Captain America. However, if one is thrown beyond the confines of the screen it's lost for good.

To reach the missile chamber, Captain America has to locate the parts of a password and collect the ingredients of an anti-toxin to increase his immunity level.

When the vault is reached, the complete password is entered to neutralise the missile and save the USA.

I used to collect Marvel comics years ago, and therefore received this with nostalgic interest. However, my high hopes were soon dashed. The graphics are unusual, and the Captain America sprite is great - but apart from that, there's little else of merit.

The gameplay is original, which is a nice thing to see, but it's also very confusing and severely lacking in variety. Captain America wanders around the seemingly alien environment, looking completely out of place.

It would have been nice if he'd been battling some of his old Axis enemies, or some super villain, rather than just slinging his shield at a series of boring automatons.

Perhaps Go! can have a second crack at the licence.

Well, what a less-than-auspicious start for Go! Captain America is pure rubbish. While it does in fact look and sound quite good, the gameplay is repetitious and dull.

Just to make it even worse, it's hard too. An annoying aspect is the program's insistence on running the same old 'joke' (By the time you read this, the Tube will self-destruct'. Cue static, then, 'Only joking... this time'). This side-splitter appears *every* time you restart the game, which is really irritating.

Come on, Go! let's see something a bit more playable.

Presentation 47%
Restart and music on/off options, but the instructions are very unhelpful.

Hookability 38%
Poor instructions lead to confusion and the gameplay only serves to compound this.

Overall 36%
The Marvel Comics' hero looks totally out of place in this ill-conceived and poorly executed shoot 'n search game.

The Marvel Comics' hero looks totally out of place in this ill-conceived and poorly executed shoot 'n search game.