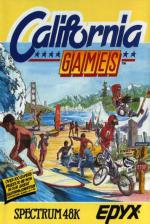 In half-pipe skateboarding, the player performs as many stunts as possible. Points are awarded for the difficulty of stunts attempted, and the highest score wins. Three falls signals the start of the next event-the foot bag, or hackysack.

Here, the player keeps a small bean bag in the air by kicking it or bouncing it off head and shoulders. Each successful manoeuvre earns points, and a varied succession of kicks is even more fruitful. Again, the highest total wins.

Surfing appears next, and the surfer moves backwards and forwards along the face of the wave, keeping close to its 'curl' to gain maximum points. Points are also awarded for the speed and length of ride, and for the number of difficult manoeuvres accomplished. Four wipeouts signals a premature end to the contest.

Next, it's back on land for the rollerskating event, which takes place along a seafront sidewalk. The course is completed within the time limit, and points are earned for spins and jumps.

Three falls means disqualification and the start of the penultimate event, which sees the player perched on a BMX racing bike about to set off across a hazardous desert course. The winner finishes the course in the fastest time, with extra points being earned by performing stunts along the way. Two minor falls are allowed during the course, but one 'serious' mishap ends the event.

The final sport features the Flying Disk (or Frisbee), with three attempts in which to throw the circular disk to a waiting catcher. The throw is made by setting the speed and angle of trajectory and control moves to the catcher who is directed to grab the disk as it flies past. Points are awarded for the length of throw and the degree of athleticism accompanying the catch.

Joysticks: Cursor, Kempston, Sinclair
Graphics: lacking in colour and detail
Sound: disappointingly sparse
Options: to play/practice one or all the events

'California Games is a real disappointment. Whether or not it's because the Spectrum simply isn't up to a game of this complexity, or because the programmers have skimped on this version I'm not sure - but it certainly isn't up to the standard I'd expect. The graphics are poor on most, if not all the events, and playability is sadly lacking throughout. The final nail in the coffin is the high price tag. California Games is a major mistake - don't buy it.'

'I thought the whole point of multiloads was that by sectioning the game up, more memory could be used on each event. Perhaps I'm wrong. It certainly doesn't seem to be the case with California Games. You have to waft for each event to load in - and when you get there it just doesn't seem to have been worth it. The graphics and gameplay seem to bear no connection with the supposedly high Epyx pedigree. Definitely not recommended.'

'California Games is a total waste of time and money. The graphics are dismal, the colour is pathetic and the sound - what sound? You have to load and reload all the events, and once completed you have to start all over again! The screen is so cluttered with stray attribute problems that it often looks as though the game has crashed! I'd steer well clear of this.'

A total waste of time. The graphics are dismal, the colour is pathetic and you have to load and reload all the events...! The screen is so cluttered with stray attribute problems that it often looks as though the game has crashed!