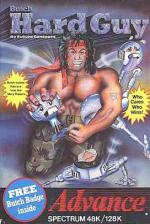 I did try to warn the Ed that if she gave this to me, I wouldn't be answerable for my puns. But she just shot me a withering look and told me I'd got a dirty mind. So here goes...

If there's one thing I like more than Butch Hard Guy it's a... [Don't even start! - Ed]. There's been a lot of wall to wall muscle in games recently - Rambo, Cobra... and that's just between their ears! Still, I don't like a man with many muscles.

Yes, when they made Stallone. they threw away the mould.Unluckily it bounced, got bent around a bit, and out of it sprung Butch, the sort of bodybuilder who fights the flab with a machete. His mission: to rescue trapped POWs.

However, when your opponents the dastardly Dr Tie Fu, life's a bed of roses - full of pr.. thorns. [Was that another one? - Ed]. These take the form of deadly but dumb robots, who're coated with poison, apart from one crucial area, their... [Watchit!! - Ed] midriffs. If Butch can punch them in the paunch, then deliver a balletic kick to the head, they'll wander off in a daze before blowing up.

But FU, (it's on the inlay. Honest!) has some other wily oriental tricks up his kimono, as you'll find during the twenty screens or so that make up Butch. [And wouldn't we all like to make Butch? Rats! Now you've got me doing it. - Ed]. That is, if you stick with it, because when it comes to fighting with the big boys, I've a funny idea they're all kicking sand in Butchy's face. This is another platforms and massacres game, but lacking the Green Beret graphics or the Cobra complexities. There's not even any scrolling, as you tackle one static screen after another.

That said, it can be mildly addictive, especially when you kick open a cage, only to have the prisoner bump into a robot on his way to the exit and get slammed back in the slammer. But in the end, I have to conclude that Hard Guy's really just... [No, no. no! Even if it is a recognised medical complaint! - Ed].

This is another platforms and massacres game, but lacking the Green Beret graphics or the Cobra complexities.