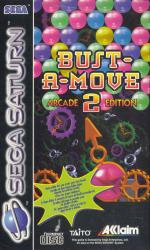 Many moons ago, a cute little puzzle game called Bubble Bobble introduced the world to Bub and Bob, two dinosaurs who liked nothing better than shooting brightly coloured balls around.

Well, Bub and Bob are back, in glorious 32 bit. The stars of the curiously-named Bust-A-Move 2 (no-one is quite sure what Bust-A-Move 1 was!) are up to their old tricks, the only major concession to new technology being the relaxing travel agent's-type posters that form the backdrops to their latest escapades.

Bust-A-Move 2 is best described as Baku Baku in reverse - you connect balls of the same colour (thus eliminating them from your screen and dumping them onto your opponent's) by shooting them up with a clockwork harpoon gun. The loser is the, er, baby dinosaur who gets overwhelmed by the advancing multi-coloured balls. Oh, and just one more thing - it's quite possibly the best puzzle game we've ever seen.

If you ever tire of the ball-shooting routine (improbable) then there are a few spins that add an extra thrill to the Bust-A-Move experience: Variety level (in two player mode) introduces rogue starburst balls that demolish whole chains; the Puzzle level sees Bub hop across the alphabet through an island, tackling different ball-related puzzles as he goes; if you play against yourself (instead of another opponent or the Saturn) then you'll be looking to beat your beat ball-demolishing time. All part of the rich tapestry of puzzle-tastic posers presented in Bust-A-Move 2. Hurrah!

Bub and Bob are back (er, whatever happened to Bust-A-Move 1?) for more top puzzle action than you can shake a tiny cute dinosaur at. From the way Bub and Bob crank the bubble gun to the brilliant inter-level cut scenes, Bust-A-Move 2 positively oozes charm from every bubble. And, as for the gameplay... well, let's just say Bust-A-Move 2 is so addictive it ought to be registered as a Class A drug!

Despite the simplistic nature of the game, I have no problem recommending this as an essential purchase to one and all.

Any doubts you may have about this not maximising the Saturn's processing potential will be forgotten once you begin playing. This simple-seeming game exerts an overwhelming control which makes it incredibly addictive - the attraction of pure gameplay class was never better illustrated.

Maybe more could have been made of the graphics, and more options could have been added, but even in this basic form Bust-A-Move 2 topples the mighty Baku Baku to claim the title 'King of Puzzlers'.

Lastability 92%
In two player mode, this will last forever.