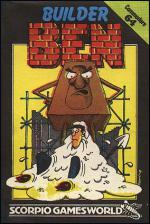 The best point worth mentioning about this game is the price tag of just under two pounds.

The first screen involves moving your man from the bottom of the screen to the top, collecting a tool and moving back again. While doing this you must not come into contact with anything else which is displayed.

In the second screen you should move up the ladders and platforms while collecting the bricks. This may remind you of the last screen in Krazy Kong, it is certainly very similar.

The general quality of the game is not very high, no exciting techniques or effects have been used. Perhaps software authors should invent new games rather than re-invent the wheel.

The program is recorded in a turbo format so that loading is speeded up. No loading problems were encountered at all.

Most of the instructions were printed on the screen by the program. It would also have been nice to have them on the inlay card for reference.

Perhaps software authors should invent new games rather than re-invent the wheel.