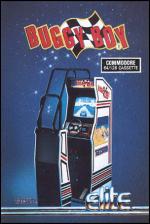 In keeping with other games of this genre, the player simply has to race between two points on a circuit within a set time, avoiding hazards along the way.

At the start, one of five courses is chosen: Offroad, North, South, East or West. Each course is split into five different sections which are raced against the clock. When the selection has been made, the race begins.

The player's view of the proceedings follows the convention of being from behind and above, with the buggy displayed in the centre of the screen. The two-speed car follows the twisting course, and steers left and right to avoid hazards including trees, boards, rocks, water, lampposts and walls. Hitting any of these stalls the vehicle, and precious time is wasted as it's restarted.

In addition to the normal driving mode, the car also jumps when it hits logs, and runs along on two wheels when it touches stones or tree stumps. These extra abilities come in useful when avoiding hazards. As well as dodging the dangerous obstacles at breakneck speed, the player also runs over bonus flags for extra points, and steers through bonus point and time gates.

On completion of a stage, extra time is added to the total, and the player continues on the next section of the course. Any time bonuses collected plus the time remaining from the previous stage are added to that allowed for completion of the latter.

Later levels become increasingly harder, with more hazards to avoid, and banked bends, tunnels and bridges to test the player's driving abilities. A football is also occasionally encountered, and is driven into for extra points.

The worst thing about this month was Buggy Boy - I had to stop playing it to write some reviews! If you think I'm joking, just try stopping once you've started. The designers have built the courses so cunningly, that hitting one too many obstacles means you coast to a stop a few agonizing inches from the finish line - and you have to try again just to see if you can get those extra seconds. On top of that, there are quick, clear graphics that are very reminiscent of the original, atmospheric sound effects, and masses of tracks - five courses, each with five stages should keep the best player going for days. Buggy Boy is a winner all the way. Buy it!

Who says the racing genre is dead? Buggy Boy proves that the racing format is very much alive and kicking. It's rare that a computer game manages to give a real feeling of thrill and exhilaration, but Buggy Boy manages it! The graphics are absolutely superb - I've never seen such a smooth and realistic 3D effect, and the 'feel' of the control method is tremendous.

The buggy responds in exactly the way you wish, and that makes for some really involving and exciting racing. There are five different tracks to race, varying from the relatively easy Offroad, to the mean East. Each one has its own distinct character and requires a different approach to complete it.

On Offroad, you can burn along and go for bonus flags, but the hazard-filled South track requires some dextral driving. What I like most of all is that Buggy Boy remains totally addictive even when the courses have been completed.

It's not only the feeling that you can better your top score, but there's something in the gameplay that makes it enjoyable to play time and time again. Brilliant stuff Elite, how about a Buggy Boy II?

There are two things that set Buggy Boy apart from other games of this type: the use of graphics and the control method. Others may look better but none are so effective (Super Cycle included), and no other game feels so good.

The buggy is very responsive and goes exactly where you want it to, creating a perfect feeling of involvement: you get totally wrapped up in the proceedings. The speed of the action is a high contributing factor and the variety between levels really makes it a lasting proposition.

Presentation 94%
Includes a selection of courses and the overall look is slick.

Graphics 91%
The somewhat chunky graphics are completely offset by the speed at which they move: ultimately very effective.

Sound 68%
Not the best ever, with little in the way of music, but enough spot effects to add a suitable atmosphere.

Hookabiity 97%
Pick up the joystick at your peril - and make sure you've got the next day free.

Lastability 89%
Very hard to beat the toughest course, but great fun while you're trying.