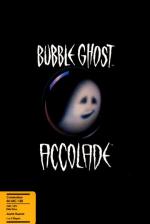 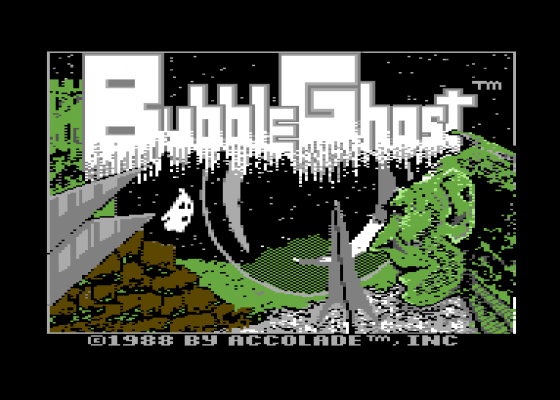 And you thought things were bad when you were alive! OK, so maybe selling oil to Saudi Arabians wasn't the most rewarding job in the world, but at least all you had to worry about then was sunburn and paying the bills. Aaaah, life!

Death, on the other hand, is slightly more stressful. A lot more stressful in fact. It's all the more upsetting because you were just minding your own business, walking through walls, going oohoohoohoo, carrying your head under your arm now and then (you know, how ghosts do!) when... pft! - it was gone. With one huge hairy swoop, Brian the Terrible nicked your soul, trapped it in a bubble and walked away.

All very hilarious for Brian no doubt, but you've now got to go to all the trouble of trying to get this bubble out of the castle with no equipment at all except your own breath (very fragrant, I'm sure). 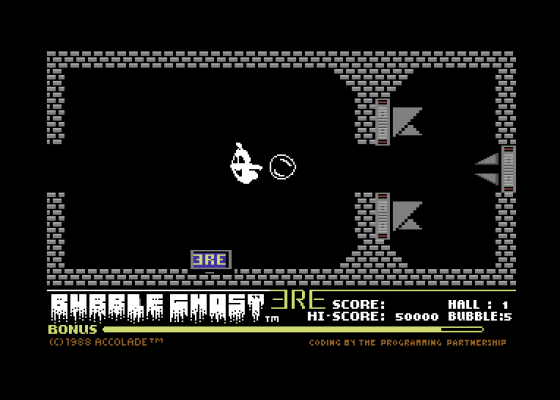 Manage to perform just the right contortions to enable the bubble to avoid the candles, fans, knives and spikes which clutter up Brian's luxurious pad and your soul might be saved. If not, you'll float in limbo for the rest of your days. Gulp!

At this point, I was going to sing you my personal remix of I'm Forever Blowing Bubbles but half an hour of combined screaming from ME, PG and GH during my practice session has persuaded me that perhaps I'd better not.

Anyway, I won't be - blowing bubbles for ever, that is - because this version of Bubble Ghost and I didn't quite hit it off. I wouldn't have minded the basic graphics or the "fingernails down the blackboard" sound, if the gameplay had been just as brilliant as it was on the Amiga - but it's not. 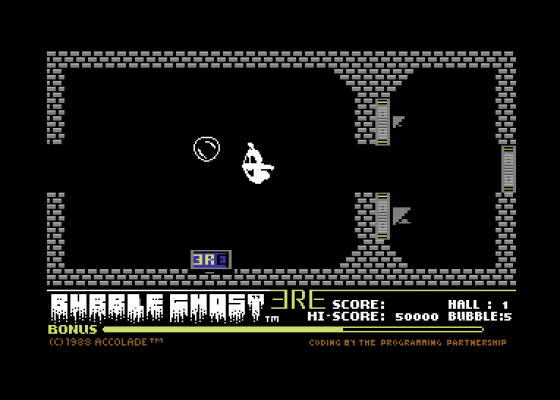 The controls are far too jerky and the ghost is just a tad too hard to move. You can still get quite a bit of fun out of manoeuvring your cutey ghostie, though (I really like the animation when he fails to complete a screen) - just not as much fun as you might have been led to exspectre (groan!).

This is a bit of all roight then, innit? Prancing around a cold, bleak castle with nothing except a pair of sheets and a lung-full of garlic breath to your name - just the way we like our cutey games up north!

Unfortunately (boo hoo! - or should that we wooo?), a bit of alright is all this is. The animation, the graphics or the sound are nowhere near as detailed (or silly) as they might have been and there's no sign of the sort of extras that made the Amiga version so brill. 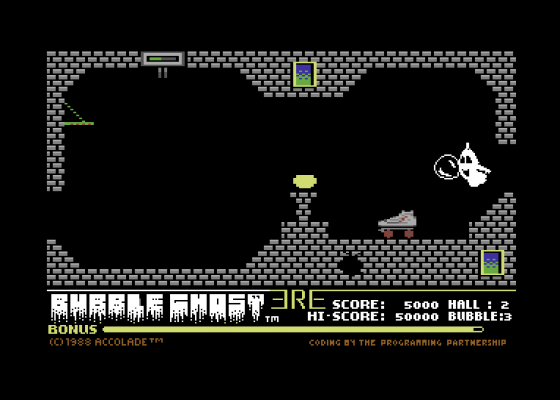 The control method isn't exactly flavour of the month earlier - it's so awkward that difficult manoeuvres take far too long to make and your precious bubble just gets burst. Ah, well!

Sound 37%
Totally unghostly (jolly) title tun and grating in-game effects - luckily you can turn them off.

Hookability 61%
Scenario appeals instantly but the control method is a bit tricky to master...

Lastability 57%
...and it doesn't get much easier - especially when the screens get harder.

Overall 62%
A pretty good C64 conversion - could have been better, though.

A pretty good C64 conversion - could have been better, though. 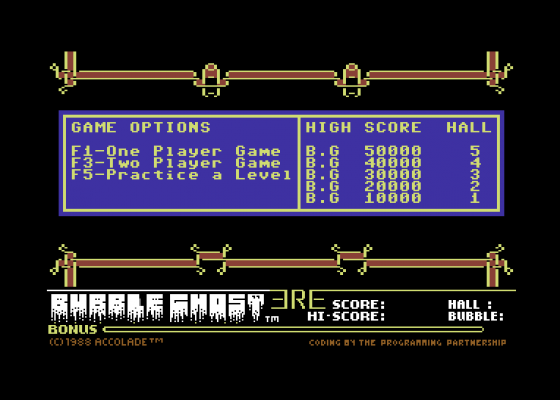 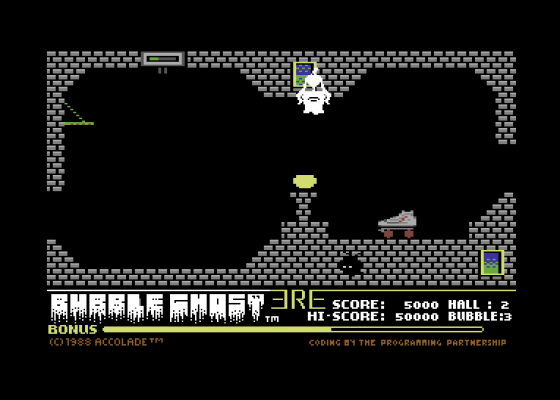