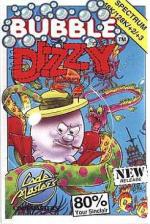 Having been stuck in many seemingly impossible situations during hard-boiled Dizzy adventures I've often thought about the amount of pleasure drowning the little sod would be.

It's strange and spooky, but Captain Nasty the pirate commander obviously had the same idea but was able to carry it out, pushing poor Dizzy over the edge of his ship from the end of a gangplank. Now Dizzy's at the bottom of a deep underwater chasm with no-one for company except dangerous swordfishes, whales and seahorses, none of whom are particularly enamoured at the thought of having a pickled egg for an aquatic neighbour. And whose job is it to get Dizzy out of this situation? Yours of course!

The game is called Bubble Dizzy because in order to escape from each chasm, Dizzy must hitch a ride on gas bubbles which rise from the ocean floor like Perrier bubbles in a big, big bottle. Big bubbles are slower and burst sooner than small bubbles but they are easier to catch. But if you manage to grab a really small bubble you'll go shooting up the chasm at a terrific rate! The game sounds much easier than it actually is and although you may get bored with it at first, it does grow on you and get very difficult too as you progress through the levels.

Graphics and sound are quite basic but playability is good and makes Bubble Dizzy worth a look for those fans of Dizzy who want something different.

A untypical Dizzy game with our hero practicing the sort of water related japes that would have drowned him in during regular Dizzy adventures. A very simple arcade game that has some addictiveness but not nearly as much as its predecessors.

A very simple arcade game that has some addictiveness but not nearly as much as its predecessors.