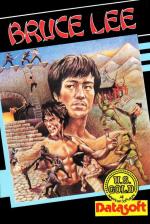 The immortal kung-fu hero comes to the Amstrad in his own 20-screen platform game of kicking, punching and lantern collecting. His task is to destroy an evil wizard but to do this he has to make his way through the cunningly constructed rooms of a dangerous fortress opening doorways and using secret passages to reach his goal.

Each screen is beautifully designed with intricate features like mountain backgrounds, statues, platforms, ladders and ceilings. Hanging up are magic lanterns, ribbon-like decorations and even the odd yin-yang symbol. These are what Brucie has to collect in order to progress through the screens. Sometimes a single object may reveal an opening but collecting them all brings more points. The doors which can be removed are usually black frames or plugs in the floor but you need to watch carefully for what disappears to guide you onwards.

Bruce can run and jump around the platforms to get the lanterns and fall any distance without harm. There are also many things he can climb up and down and he can even use secret passages to get about. Ladders, trellises and other frameworks can be clambered about on while lift-like light beams can carry you about. You don't however have it all your own way.The two dangers that will dog your every step are Yamo and the Ninja. Yamo is a green giant of a warrior who will punch and flying kick you in an attempt to pose you a 'fall' (life). He may also pursue you between floors, climbing between levels to get at you.

The Ninja is dressed in black and wields a sword. He will take more blows to defeat Bruce than Yamo but is not to be trifled with. However he won't climb upwards to fight you. only descend through gaps. Both these foes can be dispatched by punching and kicking them, the Ninja with three blows and Yamo with four. This will make them disappear for a v/hile but they keep coming back. If you just want to avoid them Bruce can duck down or leap past them. They may even help you out by fighting each other when on the same level with Bruce not in sight.

Non-moving objects can also be a danger and some are very devious. Many screens have little nodules in the floor and when Bruce, Yamo or the Ninja tread on them they are activated, spewing up deadly flame a second later. This can be used to advantage if you've got either of your adversaries on your tail, but in close quarter fighting it is easy to get caught yourself.

Other dangers are white spikes that wait to impale the careless fighter and lethal beams that shoot across gaps. An even nastier hazard is the little white dashes that zoom across the top of some floors waiting to chop Bruce down by the legs. Careful timing of jumps is needed to avoid these since they move very fast.

If you succeed in getting to the wizard he will explode leaving a triumphant Bruce to have a go at another, but harder, level. The screens are all colourful and well designed-with some good animation on the characters. The sound effects consist of footsteps as you run and fighting sounds but there's a nice title tune. It all adds up to a real oriental smash.

If you just want a good scrap, Brucie won't really satisfy you. The figures are small and the fighting isn't very sophisticated. But the game is much more than a mere punch-up, giving you some intriguing platform action and problem solving in between your encounters with the fat Yamo and the sinister Ninja.

N. 20 screens may not be enough for the hardened player.
N. Sometimes hard to know what can and can't be climbed or collected.

More than a mere punch-up... 20 delightfully-drawn screens... Very addictive and fast moving - like a good platform game should be.