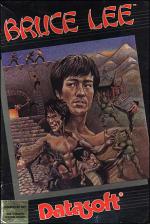 If you're looking for kicks, here's just the game for you. Bruce Lee, the master of the martial arts, has to pit his strength against that of the Ninja and the Green Yamo, kicking and chopping them as he makes his way to the fortress of the wizard.

Between fights he has to jump up and collect the lanterns hanging from the ceiling, to open the doors between the 20 different chambers. As if that wasn't enough, there are also electric charges and various other traps.

One unusual feature is that it can be played by one person against the computer, or by two people, one as Bruce Lee and the other as the Green Yamo. The two players can opt to keep the same characters throughout the game, or swap sides each time Bruce takes a fall.

With the single player option you go right back to the start at the beginning of each game, and working your way through the first few rooms to reach the more challenging ones which follow soon becomes rather tedious. It's an attractive game though, and deserves to be a success.

An attractive game... Deserves to be a success.