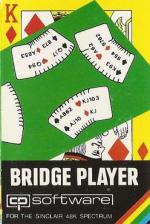 It's many years since I last played bridge, mainly because I could never find a partner who would tolerate my indifferent play. At least, I have a partner that not only puts up with bad play, but doesn't drink my whisky!

For those of you who understand such things the inbuilt bidding system is ACOL, but if you open using either Stayman or Blackwood conventions, then the computer will respond accordingly.

After the cards have been dealt you have two options. Option 1 is the normal bridge game in which you are South, and dealing is rotated as normal.

Bidding is exactly as the normal game, though if you underbid you may be told that you and your partner have a majority of points. This leads to the option of either re-bidding, or abandoning the hand.

The second game option allows you to see all four hands, and you are given the opportunity to make one bid, and nominate the declarer. The option is then open to you to play all four hands, or just the declarer's and dummy's hands, with the computer playing the defender's hands.

A very entertaining game, but it's not true that you can abandon the game during play, as the inlay states.

A very entertaining game, but it's not true that you can abandon the game during play, as the inlay states.