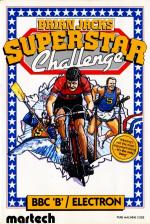 The object of this game is to challenge and try to beat Brian Jacks in a series of eight activities. The skill of play is entirely dependent upon your ability to manipulate five keys of the keyboard or use a joystick and fire button. The instruction for each event are very brief and it takes several attempts before a good technique can be developed.

The first challenge is a 50-metres swim. Using Z and X, you have to co-ordinate your strokes to keep a straight line. Periodically, you have to take a breath by tapping the RETURN key. On the earlier rounds, it's relatively easy to beat Brian.

Still in, or on, water, canoeing follows. Although you still use the Z and X keys to paddle, the technique is subtly different. The archery section that follows requires you to hit a moving target by predicting its movement and judging correct elevation of the bow. The wind speed is given as a guide. This challenge certainly needs practice.

A cycle race makes up the fourth section. This time the keys are used to drive the pedals. Careful use of the gears has to be made to enable a fast speed to be accomplished. The next event, the 100-meters sprint, is the simplest of all the activities.

The superb graphics of many of the sections are highlighted in the squat thrust competition. Using the familiar Z and X keys you move the body through four stages between being stretched fully out and the squat position. Again, the technique requires practice and development before a high score can be achieved.

The arm dips have equally impressive graphics. To lower the body, the RETURN key is tapped once. Raising it requires several taps of Z and X which are also used to arrest the fall of the body.

The final section is a football challenge. I found this most difficult to understand. The instructions with the package are extremely limited and non-existent in the program. You first have to collect the ball, dribble it between the cones and then into the red semi-circle.

I didn't realise when I fell over the first cone that I'd lost the ball. Then I tried to move the ball to the centre of the screen and not go into the semi-circle. Once in the semi-circle you have only a few seconds to aim your kick and fire. Be warned - the goalkeeper is very good!

At the end of each event the scores for you and Brian are shown and the running totals displayed before the next challenge.

Overall, this program meets the high standards set by other Martech programs I've used. While there's a great emphasis on key-tapping, I was pleased to see that there were considerably different techniques to be adopted for tackling the various challenges.

There are considerably different techniques to be adopted for tackling the various challenges.