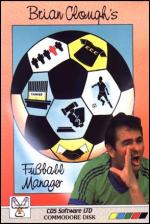 This doesn't try to accurately simulate a footballing role. It's not an arcade football game either. "What is it then?" I hear you cry, exasperated at the totally inept way the suspense is being built up. Well, oh long-suffering reader, it's a two to five player *board game* over which the computer presides. The objective is simple enough: to become as strong as successful as possible - and achieving this takes some neat decision-making, a large amount of wheeling and dealing, and a fair bit of luck.

Each player takes a managerial position over their favourite club and is given £200,000. The computer randomly generates a team of thirteen, and the player takes the corresponding cards from a pack of players. Every footballer has a 'star rating' between one and five, five being the best. The player adds up his/her total star rating for both attack and defence so that it can be typed into the computer before a match.

The wheeling and dealing can start when all the formalities have been dispensed with. The computer 'throws' the die and prints a random number on-screen - the player then moves his/her counter around the board. Each square on the board represents a situation in between matches with which the manager has to deal. There are nine different squares which fall into three different categories: financial (could be a gain or loss of money); auction (where a player card is turned over and the managers bid for it) and luck (the computer throws up a random situation which can either be beneficial or disastrous for the club involved).

The week's matches are played once all the counters have been moved. The fixtures can be viewed so that managers can loan or borrow players, and once the wheeling and dealing is through the star rating for each player is typed into the computer. The results and gate receipts are printed out on a 'teleprinter', and the action returns to the board.

The computer keeps details of all results, and the league can be displayed at any time. It also awards points depending on the player's managerial abilities and at the end of the game (a game can be any number of seasons long), the display also includes points amassed and eventually - the winner.

This is a very socially interactive game - such delights as screaming, shouting, persecution complexes, losing friends and falling to the floor and frothing at the mouth because your two star players have been killed in a car crash are all part and parcel of this excellent board game. It's easy to use and beautifully designed so that even the most ardent anti-football person cannot help but enjoy it.

It's a little pricey, but when compared with the expensive gimmicky tosh hiding behind the 'family board game' facade that's being churned out onto the toy market at the moment, it's a pretty good investment... as long as you lock up your knife cupboard and hide Grandma's knitting needles!

An excellent board game. It's easy to use and beautifully designed... so that even the most ardent anti-football person cannot help but enjoy it.