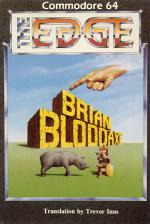 With overtones of Monty Python musically and Life of Brian visually, Brian Bloodaxe sets out on a quest full of Primary Imbalance.

Away to where, you may wonder. Well, the inlay doesn't help much - on purpose, as it states clearly enough. But Brian of the bloody axe is a Viking Rip Van Winkle who, after being stuck in an ice block for hundreds of years, has thawed out. On re-awakening, he decides to do what he originally set out to do, and conquer Britain, except now it's 1983 (a period piece as you see).

Through 100 plus screens of platform-inspired jumping, Brian must steal the Crown Jewels and sit on the throne. The screens are variously designed (an early one is a snooker table complete with killer balls for instance) and require jump/timing skills. Some objects can be picked up and used like the triangle on the snooker screen, which keeps the snooker balls at bay but it can also be placed usefully and acts as a jumping platform. The larger of the hazards can be used similarly, like the duck whose back is broad and safe as long as you walk fast enough to keep up, but watch out for the beak!

Primary Imbalance is a new and highly sophisticated programming technique whereby things don't always work as you might expect. Water drowns, for instance, but Brian has a fine line in walking on water as long as he keeps bouncing. On the other hand, Primary Imbalance may be nothing more sophisticated than a game frustration factor, depending on how you look at it. The ability to pick up objects and use them (Brian can only carry three at a time) does make Brian Bloodaxe into more than just a platform game, as the uses of the objects are critical to success and the Throne.

I'd heard rumours that there was a Spectrum emulator being produced for the C64. If this program's anything to go by, The Edge have got a full working copy and have been using it to it's full potential. This is exactly the same as the original is every respect (except the sound's louder). The graphics are of reasonable definition but usually have a mere two or three frames of animation, and flicker and colour clash, something ridiculous! Haven't the programmers heard of sprites? The game itself has little to offer in the way of anything new, rising rarely above an adequate arcade-adventure cum platform game. I didn't find myself coming back to it at all, mainly due to the pathetic graphics, grotty controls and miserable sound, but no doubt some people may get something out of it ie ex-Spectrum owners who want to reminisce about the good old days.

Brian Bloodaxe claims to have Primary Imbalance, which suggests that anything could happen, and this is certainly the case. The Monty Python music also indicates that this is no ordinary game. It is in fact a souped-up platformer aardvark, which these days seem to be the games and require thought as well as the customary skills. It has all sorts of odd happenings in it. To name a few, I found I could walk on the back of nasties but died if I met them head on - quite logical - but when jumping off a ledge onto another, it decided to move away leading Brian to a watery grave - quite illogical. So my advice is to expect anything. Or perhaps nothing much. This was quite a critical hit on the Spectrum for The Edge and perhaps they thought it would be sufficient to simply transfer everything onto the C64 as it was. Result: a perfectly Spectrum-looking game on the C64. I suppose this needn't be a drawback if the game itself was outstanding, but Brian Bloodaxe isn't - it's an okay aardvark, often amusing but in the end a bit tedious - and it would do better if it were at the £2 cheaper Spectrum price.

When I first saw this I thought that Gary had secretly connected one of Crash's Spectrums up to the telly. After spending half an hour looking for it, I realised that it was a C64 program. OH WOT?! Flickery sprites, pathetic graphics and horrible sound, the ideal ingredients for a really grotty Spectrum game. The game itself lives up to the impression generated at first glance, horrible. It's a platform aardvark which steals a lot of ideas from Jet Set Willy, with its 'humourous' denizens flickering around the screen. At its price it's a steal, The Edge robbing any innocent, unsuspecting C64 gamer.

Sound 39%
Reasonable tune that gets on nerves quite easily.

Hookability 32%
Got some interesting problems, but will they hold your interest for long?

Lastability 24%
No, they probably won't.

Value For Money 17%
You can buy 5 Mastertronic games for this price.

At its price it's a steal. The Edge robbing any innocent, unsuspecting C64 gamer.