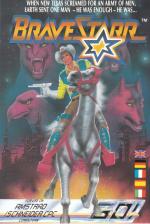 New Texas has a problem! As one of the richest sources of Kerium in the galaxy, the planet has attracted hordes of prospectors. Most of them are evil little squirts out to turn a fast buck.

All corruption on the planet seems to point to one person, Tex Hex. Now Hex's boss, a particularly nasty individual by the name of Stampede, has kidnapped the ancient Indian Shamen, believing the old sage to possess magic powers capable of bringing back to life the bones of all the broncasaurs on the planet.

If Stampede's plan succeeds, he will gain an irresistible stranglehold on New Texas. As Marshall Bravestarr, your task is to save Shamen from Stampede's grasp, and so save New Texas from total domination. To do this, you must find the locations of certain key places on the planet which contain the clues that will eventually lead you to Stampede's hideout.

You have nine days in which to complete your task.

The game starts in Fort Kerium, where the first thing you must do is shoot your way to your saddle rocket. This is an arcade of the side-view, left/right scrolling variety, in which you can run along the streets of the two or hop over the rooftops. Either way, there's plenty of opportunity to kill and maim with a good variety of nasties on the menu. Dead nasties often drop amulets which, when picked up, temporarily give you extra firepower or freeze time.

Once on your saddle rocket, the gameplay is similar except that you can stay off the ground, so avoiding many of the creatures out to kill you. The saddle is also your only means of getting to other parts of the planet. There's a mine, where you'll find a green gem which can be exchanged for cash back in the town. The cash buys you information in the local bar and so on.

The arcade side of Bravestarr has been well programmed, offering fast joystick response, reasonable scrolling, and a whole host of big, colourful creatures to zap. The problem is that defeating Stampede is just not enough of a challenge.

Outside the town, there are only four places to visit, and the game massages you into the right way of solving the game simply by offering no alternatives when you enter the wrong buildings at the wrong time.

So Bravestarr is really just a series of enjoyable sideways scrolling arcade sequences, strung together by a thin plot, providing little or no long-term challenge. From the first time I first loaded the game, it was all over in well under an hour - Shamen was rescued, New Texas was one again a safe place to visit, and another game had bitten the dust. Come on Go! We deserve more of a challenge for our money.

A series of enjoyable sideways scrolling arcade sequences, strung together by a thin plot, providing little or no long-term challenge.