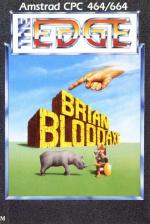 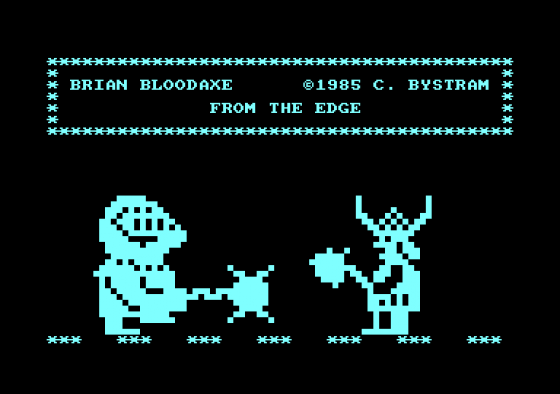 This is the game that features 'primary imbalance', flickery graphics and a mad viking out to conquer Britain. Brian has to get the crown jewels and sit on the throne with them - and that's about all you'll learn from the instructions except for the control keys.

The jewels and throne are somewhere amongst the 127 screens. Each screen is filled with platforms, pools, objects and deadly moving animals and machines. On most screens there are stationary objects which can be picked up and used, although you can only carry three at once. Brian gets around by walking, jumping and falling, although you can only fall a short distance without dying.

The creatures that inhabit the screens come in a weird variety of shapes and sizes ranging from bishops to soldiers, runaway rhinos to the Loch Ness monster and Neptune. They all follow movement patterns, shuttling up and down or left and right, sometimes triggered by Brian's actions. Contact with anything moving (sometimes static as well) will injure Brian, losing him energy. If he suffers too much he loses a life, leaving his helmet to fall to the ground and starting him back where he entered the screen. 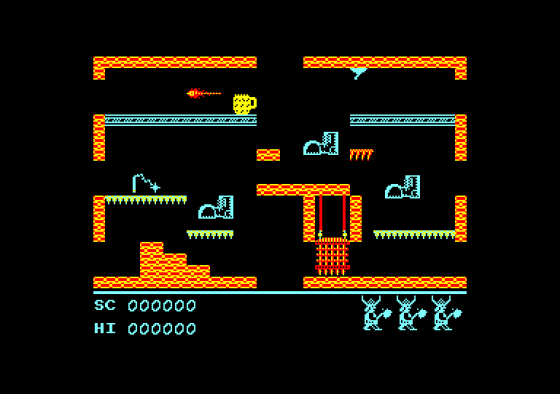 The wildlife doesn't have it all its own way. though, since Brian can fight back. By standing underneath things and jumping up you can spike creatures with the prongs on Brian's helmet, killing them. These can also be used to stick him into ceilings, although they work loose after a while dropping you to the ground. Creatures can also be used as stepping stones allowing you to jump or walk on top of them.

The objects that are lying around all have their uses but you have to work them out for yourself. Many allow you to open gates which will be hoisted out of the way when you get it right. Others may have a more devious purpose like stopping or making an event happen on screen. The only real way to find out is by trial and error which will result in the 'Hand of God' blowing Brian into space dust many times.

Screens can be very different with some interesting effects. There's the pool table with deadly balls bouncing around. Neptune and the Loch Ness monster that rise and fall from their watery lairs and Daleks and soldiers who fire guns at you. The lakes are particularly nasty, usually infested with sharks and, if Brian sinks underwater, he gradually drowns as his energy bar falls. Other things you may be amazed to meet are the galloping rhinos, cruise missile, toilets, a mad Scotsman and a clockwork orange.

The large variety of graphics is somewhat spoilt by the flicker that accompanies many The colour is better than on previous versions though. The tune that plays throughout the game is the Monty Python theme song and a nice rendition of it too. It may take some time to start solving problems but is very absorbing once you do.

Brian's pretty flickery and the Viking helmet may be just a little old hat these days, but the game's still got enough charm to merit a serious look. I found some of the problems very tricky and some of the opponents very amusing.

P. 127 screens and over 300 enemies.
P. Many problems to solve.
P. Some nice touches of humour.
P. Very difficult to complete.

N. Very flickery graphics in places.
N. Takes time to get into.
N. Some problems may need too much lateral thinking. 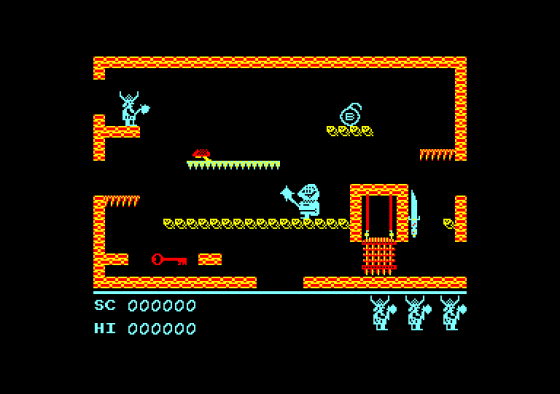 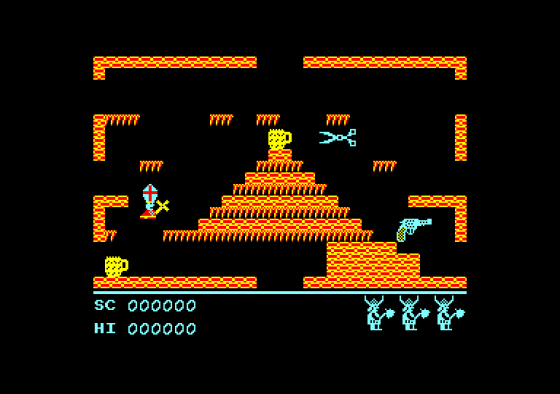