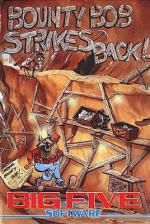 Bounty Bob is the sequel to the classic Miner 2049:er, which spawned a whole generation of platform games. Bounty Bob was originally available in C64 and Atari versions, but has now been converted for the Spectrum.

Little has been lost in the process in this game, which is a must for Spectrum owners.

The mutant organisms of the Yukon Yohan have taken over 25 screens of a mine. Your job is to take them back by walking over every piece of framework which turns solid as you do this. This isn't going to be easy as every inch of the mine is covered in mutants.

Luckily there are hydrolic lifts and slides to get you about, not to mention the curious suction tubes which such you up at one end and spit you out at the other.

Scattered throughout the mine are some strange objects that, when collected, allow you to turn the tables on the mutants. However, this effect doesn't last long so you have to use the opportunity well to either kill lots of mutants or get safely through to the next object.

Each screen presents a different challenge and it will take you some time to pick your route through the mine, making best use of the objects, slides, suction tubes and lifts.

Once you've completed all 25 screens, you try them again at either a higher skill level or change your number of lives (between 2 and 4) to form a new challenge. Changing the skill level to medium increases the speed of the mutants, whereas "hard" gives you the added problems of regenerating mutants and platforms that reset.

Finally, as an added bonus the high score table is in fact, a factory in which you control two bulldozers that select the letters to form your name.

Congratulations to US Gold on an excellent conversion of a superb game.

An excellent conversion of a superb game.