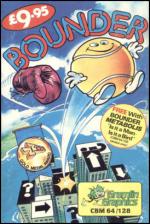 The platform game is dead, long live the platform game! Confused? You will be, since Gremlin Graphics' latest is a platform game but not in the traditional sense of the word. Gremlin have taken the conventional 'side on' view, turned it through ninety degrees and come up with a platform derivative that can only be described as *weird*! Enter the surreal world of Bounder, a world where tennis balls bounce high - higher than you would expect. And this is where the platforms come in. It's hard to see that platforms have anything to do with this game, as they are seen from above - but they are there, and if you fail to recognise this, then the game is lost from the start.

The action takes place far, far above the ground with the simple object of guiding an extremely vibrant tennis ball through ten tortuous courses, avoiding all manner of hazards along the way. Each course consists of several platform arrangements, with an expanse of colourful scenery below. A feeling of depth is created not through geometric projection but by clever use of two-speed vertical scrolling - multi-coloured scenery in the background scrolls past slower than the grey paved platforms in the foreground, producing the required parallax effect. The ball on the other hand moves 'in' and 'out' of the screen to give the impression it is in fact bouncing up and down.

Most obstacles encountered throughout the various levers can be jumped with relative ease, but some need that little bit of extra 'boost' to get over or around them. So, there are blocks marked with an arrow to give that added push. Catapults are more powerful than the arrows and are found on higher levels, along with disappearing platforms that must be jumped on with caution and transporters that teleport the ball from one point on the screen to another. Of course things are not so simple, for the ten levels also have their own fair share of nasties in the form of assorted aliens, such as strange bat-like creatures and jet propelled fish and flies, along with many devious traps, all in true Indiana Jones fashion. Other hazards include impassable walls which must be jumped around, volcanoes that spew fire in abundance, and mines that explode into deadly pieces of shrapnel. Fans blow the ball off course and can prove both useful and a pain, while spinning sticks are definitely most annoying.

To make life a bit easier there are plenty of question marks scattered along the courses. These squares, when landed on, give a surprise, usually pleasantries such as extra lives, 'jumps' or points. Occasionally you find yourself being chomped by a pair of evil gnashing teeth or squashed by a pair of boxing gloves, but at least the squares stay the same every game. As the levels progress, the courses get longer and are far more treacherous, with sneaky dead ends in mazes of impassable walls and an increasing number of aliens to hinder progress. At the end of every level there is a bonus screen - several question marks are dotted about the screen and you must land on as many as possible before you run out of 'jumps'. You start with a limited supply of jumps, but they are only used up on bonus screens. Should you successfully land on every square, then you are awarded a Bounder bonus of 10,000 points, along with the standard bonus of 10,000 points for completing the level. You then move on to the next level and yet more hassle...

Still confused? Don't be - the game is certainly easier to play than it is to describe!

Bounder has one of the silliest scenarios ever seen, after all when in your life have you had the chance to become a tennis ball and bounce about a platform miles above the ground? The graphics are almost arcade quality with fabulous animation on some of the nasties and really effective routines. The sound fits the game perfectly, with an apt 'bouncealong' soundtrack which plays throughout the game.

Along with being a brilliant arcade game, Bounder has another strong point - it's one of the most frustrating and maddeningly addictive programs yet. Once you start playing it's almost impossible to put the joystick down! If you want to be driven bananas by a program then buy this, each one should come with a government health warning!!

This is without doubt Gremlin's best release to date and is one of the most addictive games I have ever played. The graphics are of a very high quality standard and the sound complements the smooth scrolling backgrounds perfectly, with a boppy little number playing throughout. Bounder is one computer game that would not look out of place in the arcades, as it looks and plays so good with its multitude of highly original and absorbing gameplay elements. Don't be deceived by the simplistic nature of Bounder, since lurking beneath an apparently placid exterior is a beast of a game. Once played it's never forgotten.

Bounder is one of the most original games to emerge onto the market for an awful long time. Though at first only graphically impressive, after a few games you really get hooked. I can't exactly define why this game appeals to me so much but it seems to be addictive in the same way as the arcade hit Marble Madness.

Graphically Bounder is superb, the two-speed scrolling on one screen creates a great sense of depth. The ball itself is beautifully animated, looking very realistic as it bounds in and out of the screen. Though the tune isn't the best I've heard on the 64, this persistent little ditty suits the games so well and any other piece of music just wouldn't work as well. Bounder is definitely one of the games for the New Year and with the adequate Metabolis included on the B side the whole package presents excellent value for money.

Presentation 91%
No options but the game is extremely well thought out and executed.

Sound 90%
Both music and sound FX are great and suit the game exceedingly well.

Value For Money 98%
Two games for the price of one, even though one of them, Metabolis, is average.

Overall 97%
An absorbing, demanding and totally innovative approach to the ageing platform formula.

An absorbing, demanding and totally innovative approach to the ageing platform formula.