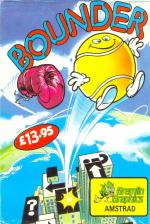 Gremlin are really into cute characters and weird gameplay these days. This latest idea is weirder than most but immensely playable and addictive. The bounder in question isn't a badly behaved cad but a tennis ball doing what it does best - bouncing.

You'd need a pretty warped imagination to cope with a scenario for the game but basically it involves keeping the ball bouncing along a vertically scrolling course for as long as possible. Along the way you need to pick up as many points as possible and there are plenty of ways of doing it.

The scrolling course is split into ten levels with a bonus screen in between each one. On each level there are a massive number of obstacles that have to be negotiated by the ball before it can reach the goal at the end of the level. When the goal is reached a bonus screen is played in which masses of points can be accumulated.

The ball begins at the bottom of level one and at the bottom of the screen, which then begins to scroll downwards at a constant speed. The ball has to be bounced along trying to keep pace with the scrolling since being at the very top or bottom of the screen can cause control problems. The ball bounces automatically but you control its movement through the air and can perform some rather unusual manoeuvres like turning at right angles.

At first the control will cause problems and you'll find lives slipping away very quickly. However the action is so addictive that you'll keep coming back for more and gradually get the hang of the control. Even once you've mastered ball control new sections of the game will always throw surprises that can result in rapid disaster.

The scrolling course is composed of various sorts of scenery most of which aren't safe to go on. The only thing you can bounce on are floor plates decorated with a hexagonal design and some other special squares which perform particular functions. Other areas of land will either let the ball drop into them or prevent it going over. Mountains and walls have to be steered around while most other things have to be bounced over.

As if all that weren't enough there are also some nasty breeds of alien that will move in patterns on the hexagons or actually home in on the ball. These can't be shot or destroyed but with extremely good timing they can be bounced over. The best advice is to find out where they appear and avoid them.

The ten levels are of varying size but combine to make a playing length of over 150 screens. Right from the start you'll know you've got a tough task on your hands with things getting really hot on levels two and three. After that, there's just no let up.

There are a number of special squares. The first ones you'll encounter are mystery bonuses and extra-power jumps. The bonuses are squares with question marks on them which can give extra points, jumps, balls or something altogether less pleasant. What each one does has to be learnt through trial and error but it stays the same in all subsequent games. The extra-powered jumps are achieved off squares with arrows on them and keep the tennis ball in the air for twice the normal length of time.

At the end of a level there will be a bonus screen if you have any bonus jumps left. These jumps are only used on these screens made up of many squares bearing question marks that will give you large bonuses. The ball has to hit as many as possible, an extra bonus being given for the number of jumps left. Jumps need to be conserved carefully since they will be needed on later bonus screens.

Despite its difficulty the game is incredibly addictive and however many lives you lose you're guaranteed to come back for more. The scrolling is well done, although not perfect, and the graphics are superbly drawn and very colourful. The music that plays throughout the game is also pleasant and adds to the enjoyment of the action. Doesn't have the depth and strategy of some games but it has a wealth of originality, addictiveness and great action.

If you thought Thing would be a hard act to follow, you're in for a surprise. This game may be cute, but you'll probably be too busy to notice. The gameplay is so absorbing, so fiendishly addictive they you just can't put the joystick down. If the frustration doesn't drive you up the wall, the twee little tune will.

N. Not for those with a bent for strategy or puzzles.
N. A trifle too difficult to start with?

Very playable, although some of your opponents use the lack of colour to sneak up on you.

Doesn't have the depth and strategy of some games but it has a wealth of originality, addictiveness and great action.