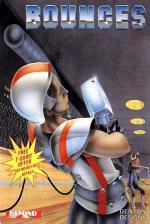 Bounces is the super-sport of the future, despite the fact that it's played by a Couple of dudes dressed up as a viking and a knight-in-armour.

Eric and Ashley (for it is they) compete in a sort of ball-game come sword fight which can be played by one or two players on the Spectrum. The action takes place in an enclosed arena, and both players are linked to one end of the court by a piece of elastic which continually pulls them back. Friction soled shoes are their only ally... An overhead pipeway fires a ball into play and the aim of the game is to shoot the ball into one of the goals in the ceiling. The ball ricochets off the walls, floors and ceiling of the court at great speed and is quite capable of bowling a player over.

Players hold a catcher in one hand and the ball may be seized and retained if it is in reach by pressing the fire button. Releasing fire shoots the ball back into play. A player's arm may be moved to eight different positions, and the ultimate aim is to shoot for goal, although if all else fails, direct confrontation is quite good fun. Try bopping your opponent over the head or poking him in the stomach with the catcher!

Status bars monitor both players' energy levels collisions with the back wall, the ball or the opponent's catcher result in energy loss. Sand trickling through an hour glass indicates how much time has elapsed since play began: the game is played in two ninety second halves and in good sporting spirit, you get to change ends half way through.

The players can bend down, jump up, stump forwards and backwards during a bout. After each game finishes a results screen appears which keeps a running total of Eric and Ashley s respective victories.

Points are scored for bopping your opponent with the catcher or a well-aimed ball as well as for popping the ball into one of the three ceiling goals at the other end of the arena. While a player can recover energy by taking a rest on-court, running the energy bar into the red results in temporary paralysis and a set of three undefended goals for the opposition to aim r.

'Bounces is quite a neat game. I'm not convinced it's excellent, but it's quite good, and relatively challenging. I don't agree with 'Sport of the Future' though: I can't see masses of footie fans following this every Saturday in 20something-or-other! There are different ways to play, and it's easy to build up a personal though I can see it getting boring after a while. The ten quid price tag is a bit high, and the game could be improved upon in quite a few ways. Nothing stunning, really.'

'I had a little trouble getting started as I wasn't supplied with any instructions, so I had to learn how to play it from scratch. I had just about mastered control on my fourth go. The graphics are very pretty, and there are no attribute problems or graphics flicker. Sound is fairly well used, although a tune would have added to the atmosphere of the game. I don't really see this game doing terribly well, as it costs too much. For a tenner I would expect a few more adversaries and the odd change of scenery too.'

'Bounces is one of the better games from the Denton Design team, after the appalling Transformers, and it combines smooth animation with some well drawn characters. When the men move you can see their bodies lunge forward trying to break the strain of the cord which stops them from bashing the other man to bits. When they hit the wall the legs of the men do actually fall from underneath them as they crumple up. I found the game hard to play at first, but once the rules are understood you can have a very competitive game with your opponent - be it the computer or a human friend. Bounces is a very strange sports game which is most fun in the two player mode. Beyond have got a game which is very playable- it requires a keen eye to judge where the ball will bounce off to next. Bounces is a good game if you like something out of the ordinary.'

A good game if you like something out of the ordinary.