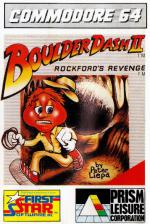 Boulder Dash II, which is subtitled Rockford's Revenge, is the sequel to the hugely popular Boulder Dash which was one of the best games of 1984.

The game chronicled the attempts of the game's hero, Rockford, to dig for diamonds while avoiding falling boulders, amoebas and deadly fireflies. Most of Rockford's problems stemmed from the fact that when the earth surrounding a boulder was dug away, that rock would fall and if Rockford was still under it then a life would be lost. However, boulders had to be moved to get at the diamonds and so each of the game's sixteen screens posed a different logic problem which then had to be solved with a joystick. Some screens were confounded by deadly fireflies, growing amoebas and butterflies that while death to touch turned into diamonds when crushed by a boulder.

Boulder Dash II includes all of the old features and a few new ones that will give even experienced Rockfords a run for their money.

The first difference between the two games that springs to mind is the increase in time that you have to complete each screen. This is on average four minutes which is a lot more than the 100 seconds allowed in Boulder Dash. This is because the screens are even more involved and pose more difficult problems.

These include a screen where you are literally showered in boulders and diamonds and another which contains only one boulder. Unfortunately, there is a horde of fireflies on your tail from the start so any wrong turn will be your last.

There are also some new features including a watery style barrier on which objects will settle for a few seconds before sinking out of your reach. A particularly intriguing feature is an expanding wall that grows as the surrounding earth is dug around it which will surely catch unsuspecting Rockfords.

As with the original Boulder Dash, the secret of success lies in knowing your enemy. Particularly useful is the knowledge that fireflies will always turn to the left (at a junction) where butterflies will always turn right. However, in a panic situation it is often difficult to remember which is left and which is right and then you have to manoeuvre in the right direction.

As a bonus, Monolith have included both versions on the same cassette so that new players can practise on the earlier, easier version, before tackling this one.

The original Boulder Dash was one of my favourite games of 1984. Boulder Dash II is even better. Perhaps in time we will see Boulder Dash III and IV. As far as I'm concerned, Rockford will run and run.