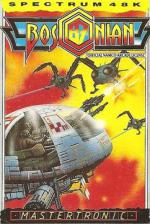 Browsing along the software shelves, you'd be forgiven for thinking that Mastertronic's Bosconian is just another third-rate shoot 'em up. and leave well alone.

Well, pull your finger out matey, dig out two of the little gold jobs, give them to the nice person at the counter and get Bosconian home ASAP. It's great.

Bosconian is a coin-op conversion, but it's a very old coin-op, dating back, to around 1981. And I don't know about you but I was still chewing my Farley's Rusks at that moment in time. So it's not likely that you're going to remember it terribly well. Still, that doesn't really matter, conversion aside, what we have in Bosconian is a very tidy little shoot-em-up.

Last month we mentioned that Bosconian didn't really have a storyline. And that still stands. All you need to know is that this game requires no great amount of thought almost no instructions (just blast, blast, blast), and a truly serious amount of joystick twizzling.

Aforementioned spaceship can be refueled and generally titivated by driving over various icons, bombs, fuel cans and the such like. These seem to be carelessly littered around the cosmos.

And that's about it really.

There are multiple levels (just so you know) and the way through each of the levels is to blow up all the space stations, before they blow you.

Level two looks much like level one, various static objects linger, hoping you're going to bump into them, and the odd fighter wave will attack, but since you've got an advance warning system, all you have to do is spin round and round in circles firing a hail of bullets and they'll soon naff off.

Bosconian is great entertainment, it looks more like a full price game, and that you can put down to the fact that it's been done by Binary Design (Zub, Amaurote). And it's got pretty swizzy 128K music and explosion noises too.

Brilliant budget alien killer. Looks and plays like a full price game. Definitely one to take notice of.

Brilliant budget alien killer. Looks and plays like a full price game. Definitely one to take notice of.