﻿ Boris In The Underworld (Superior) Review | The Micro User - Everygamegoing

Published in The Micro User 2.08 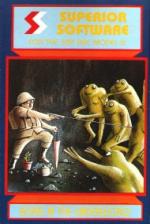 Boris has had his home raided by the underworld creatures who have stolen most of his possessions.

As you can imagine, Boris is quite peeved and sets out to retrieve his valuables. Your task is to guide him through the underworld and fight off the creatures that await him there.

When Boris In The Underworld (Superior Software) starts, Boris appears on the left hand side of the screen and a large number of nasties appear. You have to shoot these before the underworld fiery walls engulf you.

Each time you successfully fight off a horde, you will get one of Boris's possessions back. As the game progresses, it will get harder to kill the creatures, indestructable discs will start flying around the cave and the fiery wall will move in faster.

The graphics are sharp, characters are colourful and well defined and the animation is suitably entertaining.

Although the sound could have been a little bit more imaginative, the whole thing is generally of very high standard and all the little professional touches such as freeze, sound off/on option and high score table are there.

The only faults on the technical side were the lack of a quit facility and the inability to switch sound off in the middle of a game.

However, it is addictive and will appeal to a lot of arcade game freaks.

Addictive... and will appeal to a lot of arcade game freaks.