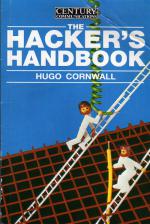 This issue, we look at The Hacker's Handbook - both of 'em!

It's nice to see some computing books coming out that aren't just variations on the 25 Spiffing Games/Machine Code For Morons format.

April saw two new releases for those who want to explore the communications abilities of their machines. Coincidentally, they were both called The Hacker's Handbook (which may make this review a bit confusing) but they take quite different views of the subject of hacking itself. The first, published by Century Communications and written by Hugo Cornwall (an alias, of course) explores the glamorous semi-legal aspect of hacking and caused a certain amount of controversy when published, with "a top Scotland Yard detective" declaring "no good can come of anything in this book." This, of course, will probably do wonders for sales... but whether criticism will be proven true remains to be seen.

Admittedly, the book does give detailed accounts of events as The Great Prince Philip Prestel Hack, and even of bugs in those hole-in-the-wall cash dispensers, so I suppose that the Police concern is not entirely without justification of some sorts. The problem here is that theft of information is not illegal, mainly because the law hasn't yet caught up with recent advances in information technology - it could certainly be argued though that breaking into private files is immoral and ought to be illegal. But here, the book's author adheres to the view of the Hacker as a sort of computerised Raffles - more interested in the challenge of a good break-in than in material gain, and having a strict code of honour. Hackers, he tells us, should not be interested in fraud.

It's a matter of semantics really, but a Hacker, according to Cornwall's definition, is not interested in criminal activities, therefore anyone who does embark on hacking with criminal intent is not a Hacker, but a criminal. Still, the ethics of hacking aside, the Century Handbook is a very good read. It is, I think, a little too technical in places for the beginner (I got lost on several occasions whilst reading it), and probably requires some experience with modems and knowledge of things like protocols in order to get the best of the book. Event so, it is much better written than the average computer book. The author's style is clear and uncomplicated and his enthusiasm for the subject carried me through the technical bits that went over my head. Well worth buying.

The second Hacker's Handbook, published by Longman and written by Geof Wheelwright and Ian Scales is probably required reading for anyone who wants to read the Cornwall Handbook. Subtitled the 'ZX Spectrum 48K Communications Guide', it is a machine-specific introduction to the subject and actually explains all the technical bits that I didn't understand in the first book. The page layout is quite useful in that the margins carry brief explanations of any jargon that may appear in the main text. Starting absolutely from first principles with a chapter entitled 'Why Communicate?', the authors assume no prior knowledge of the hardware, software and facilities available. This Handbook though, is not concerned with breaking into other people's systems and deals only with the 'legitimate' services available quite freely to anyone.

There are chapters on Prestel and Micronet, Bulletin Boards, various types of electronic mail, and, thank heavens, a gentle introduction to modems and interfaces (ok, hands up everyone, me included, that has seen the legendary RS232 interface referred to all over the place - even on Spitting Image! - but never had the faintest idea what the damn thing actually does?). The authors' style is a little drier than Cornwall's but as they had a lot of explanatory material to present, that was probably inevitable.

It is interesting to compare the attitude that this book takes to the kind of hacking that Cornwall deals with. This, the authors tell us, is increasingly becoming an activity for professional criminals, whereas the 'sporting activity' that Cornwall discusses is now the exception rather than the rule. This is a debate that will go on for ages, and if you want to be in on it, then I can recommend both these books to you, though I should add that for the beginner the Longman Handbook is probably the more essential of the two, and provides the experience and information that you will need to fully appreciate the Century Handbook.

Highly recommended, although perhaps a bit technical in places for the complete beginner.
Logout