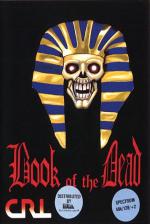 The Book of the Dead is a fascinating little program with a lot to offer any adventure lover, and CRL is doing the problem solver a great service by bringing it to a wider audience. I say bringing it to a wider audience because this is not the first time I've seen this program. It first landed on my desk a few months ago, with a hand-drawn cassette insert. Ho hum, I thought, just another Quilled adventure. Not so, I quickly discovered! Essential Myth, the original crew that perpetrated this title, has managed to produce a challenging adventure with a much more interesting plot than most.

If it's so ruddy good, why didn't you review it last time around instead of making us wait for CRL to snap it up, I hear the assembled multitude cry? Simple - it had some rather odd little bugs in it - in a certain location, if you did something that you weren't meant to do, the characters were replaced by black squares. Not too playable. However, you can bet your watusi that was one of the first things I tried, and, lo and behold... Now all is cured, and I finally found out what God really had to say...

Anyway, enough wittering. You (yes you, pay attention) are Kteth, a minor Egyptian deity with the head of a falcon, which, in Ancient Egypt, was a good sign. Your daddy, Set, has murdered Osiris, head honcho in God-land, in the hopes of taking over the place; such is not to be, though, and the sins of the father have been visited upon the child - you've been kicked out of heaven. Your only chance to regain your Godhood is to solve the problems that face you in this adventure; fail, and tough luck, you're condemned to being a mortal for the rest of your life. And mortals don't have very long lives.

The game is a text and graphic adventure. The text is well designed, with some nice touches, like the key-shaped cursor. The graphics are fairly standard, although some locations, like the temple, are better than averagely depicted.

As you journey about, you are trying to score points and achieve Ma'at. Quite what Ma'at is, I haven't been able to work out, but I think it's like mana - magical/mystical strength. Get enough of it, and you'll be able to re-enter paradise, or the Ancient Egyptian equivalent. Some of the things you have to do to get Ma'at are pretty Ancient Eqyptian - just think in terms of primitive farmers and you'll know what to do with the sheep, for a start. Other problems, though, have less relevance to Egypt. There is what looks suspiciously like a TV in one of the screen shots on the packaging, and another shows a very modern looking street. I haven't been able to visit these locations myself yet - I suspect they're in part two of the adventure, and, as usual with two-part adventures, you can't get into the second part without the code word which you get from solving the first part and I'm too dim to solve the first part and I'll never make it as a godling, even a minor one...

I like what I've seen of this game so far. The problems fit together well, and there's a refreshing absence of any need to kill things, which you find so often in adventure games, especially one's which arm you with a knife in the first location. Actually, the knife is for a very logical task early on in the game. Admittedly, there are the by now fairly standard touches which you tend to find in too many programs; the cliff, the rope, the hermit etc. But in the main the game has an originality that makes it a cut above the usual fodder you get.

I think CRL has got a winner here, although I'm a teeny weeny bit doubtful about the price - I think it could be a quid or two lower. Still, on reflection, I have to admit that I think it's well worth it, even at £8.95.

Text and graphic adventure with zip and originality. Any game where you start off in an egg has to be good!

Text and graphic adventure with zip and originality. Any game where you start off in an egg has to be good!