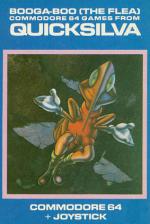 Every now and then a game comes along that's so revolutionary, so full of new ideas that you know it will be a winner the minute you set eyes on it. Boogaboo is one such game.

Set in a world of weird and wonderful vegetation, you play the part of Boogaboo the flea - who's fallen down into a deep chasm and is trying to escape. You must make the flea jump onto the numerous ledges in the cavern in an effort to escape to the surface.

You control Boogie by tapping the joystick making him hop, skip or jump according to the strength. The graphics are breath-taking - easily the best to come from a British software company.

The game requiring timing and co-ordination rather than a fast firing action and is addictive and frustrating in the extreme. The whole C&VG team fought over it for three days - a record equalled only by Mattel's Burger Time.

Boogaboo doesn't have the cavern to himself - hungry pterodactyls fly around waiting to pick off helpless insects. Falling off a ledge doesn't cause him any harm unless he falls into the jaws of one of the Venus Fly Traps - then I'm afraid the game is up for poor old Boogie.

Breath-taking graphics, perfect animation and a fresh and original approach to game design have been combined to produce yet another top rate game for the Commodore 64.

Boogaboo is available from Quicksilva for the Commodore 64 and Spectrum and costs £7.95 for the C64 version.

Breath-taking graphics, perfect animation and a fresh and original approach to game design have been combined to produce yet another top rate game for the Commodore 64.