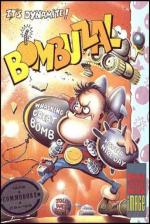 Bombuzal is round. Well, roundish. But he lives on platforms and carries bombs. He also sets them off. That's his job you see, setting off bombs. Let me explain further.

Bombuzal lives in a strange land in another dimension. A land of platforms and bombs. The inhabitants of this strange dimension would be much happier if their lives weren't plagued by bombs going off left, right and centre, so someone must get rid of them all. There is only one person up to the job... You! Well, you see, in the game you play the part of... oh, never mind.

The pesky bombs come in three sizes: small, medium and large (what a surprise!) each with its own explosion area. Various amounts of these bombs are scattered around small clusters of platforms which are now deserted because of the hazardous conditions the bombs create. To clear a sector, all the bombs on the platforms must be blown up, without you going up with them or falling off the platforms.

This may sound easy enough but you've got to remember to take into account bomb chain reactions, collapsing platforms and icy floors. Certain bombs can only be detonated by making very clever use of chain reactions and the occasional tracks in the floor which allow you to move a bomb into a better position.

Different platforms have different features and tiles. How they're positioned dictates the strategy required.

I haven't played a really good puzzle game since Tetris, so I was looking forward to something appearing quite soon. Power Pyramids failed to fit the bill but Bombuzal certainly has! It's great!

The graphics are very neat and have an incredible 'cute' quality to them without confusing the puzzles at all. The levels start out quite easy but soon get really difficult, with some unbelievably devious bomb patterns. One of the signs that this is a good puzzle game is when you hear people shout "Aw, that's not fair... oh hang on... Ah! I see!" then quickly start a new game with their new knowledge of bomb disposal. I'd say that Bombuzal is the best puzzle game since Tetris, and coming from me, that's good!

Yippee! Yoohoo! Weyhey! Yeeha! I'm just doing a celebratory jig around the office because Bombuzal has got to be my favourite game of the month. I mean, it's rare enough to find a puzzle game in the first place; when you get hold of one as absorbing and cleverly designed as this - well, you've just got to celebrate.

There are so many different features that (unless you've got an attention span of under two milliseconds) it's totally impossible to get bored. The puzzles get incredibly devious the further you go and, as you've got two sets of dimensions in which to play, if you over do make it through to the end of the game in 2D, you can start all over again in 3!

Using the password system, you just keep on playing from the point at which you left off. If you're thinking of treating yourself to a really unusual game over Christmas, get Bombuzal - it's cute, cuddly and absolutely brill!

What an original idea this is! Old Tone Crowther has come up trumps again with one of the cutest and most playable puzzle games on the C64. The presentation is excellent with a choice of a 2D or 3D perspective and a codeword system so you don't have to start from level one after dying on level 119 out of 120.

The bomb structures are very well thought-out and tricky with it, making you try time and again until you've got it right. To be honest, I can't see many people throwing their joysticks down and saying 'stuff that'. I rather think that they'll be saying 'well, if that didn't work, maybe this...'

After the somewhat average Fernandez Must Die, Tony Crowther and David Bishop have given us a real gem. Well done, lads!

Graphics 79%
Cute, but not brilliant. They do portray the action nicely, though.

Sound 71%
An adequate tune and some decent spot effects. The speech is a tad rough, but really adds to the atmosphere.

Hookability 97%
The first levels are just simple enough to grab you instantly.

Overall 97%
The cutest puzzle game on the Commodore 64 and it's really addictive as well!

The cutest puzzle game on the Commodore 64 and it's really addictive as well!