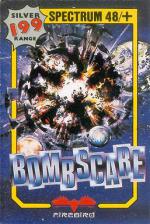 Budget games just seem to get better and better. Bombscare is one of the best I've seen for a long time. It's a race against time on the planet Neptune where an enemy has planted a big bomb in the space station. Only Arnold, the cute bomb disposal droid, can stop the base being destroyed.

You're in control of Arnold and must guide him through the many detailed 3D rooms in search of the correct tools to help defuse the bomb. Each room is inhabited by energy-draining creatures left behind by the enemy. Arnold can avoid or zap them - but his supply of ammo is limited.

Objects he discovers can come in useful. He can find things that give him extra lives, transport him from place to place, act as SMART bombs - blasting all the creatures in a room - or protect him from harm.

Things that look like shields are protection devices, bomb-shaped objects blast the creatures, an odd pyramid thingy acts as a transport back to the "bomb" room, while a square shaped doodah with a wiggly line across it will transport Arnold to the exit when activated. Many other objects can be found, but I've yet to work out their functions.

Arnold can carry up to five objects which are selected and activated via the keyboard. Joystick controls are used to move the droid around and fire at things. A small window on the right hand side of the screen displays the object currently in use.

You really have to work out what does which simply by activating the object you've picked up and watching what happens on-screen or on your status readouts. Some objects help keep Arnold going by replacing lost energy and zapping power.

There are teleports dotted around the space station which you access by running into them. A small window opens in the middle of the screen requesting a password - as in Starquake. If you don't know the password, you're stuck! And quite where you find them I'm not sure yet.

You'll need to hang onto the objects which get you back to the "bomb" room and the exit in order to make a quick getaway. Even if you don't succeed in defusing the bomb you can get Arnold out of the space station before the big bang by making a dash for the exit. This gives you a 1,000 point bonus - but not a lot of satisfaction!

If you don't kill the bomb you see a nice end-game sequence in which the plant is blown into a billion bits!

It's amazing to think that a couple of years ago a game like this would have cost around £9, would probably have come from Ultimate and have been described as a major leap forward in games technology.

Here we have a game that costs just a quarter of the price, has great graphics, good sound, is immensely playable and only costs £1.99.

Bombscare is a brilliant budget release destined for a very high chart placing. One some software houses producing full price games should look at and take note. Get it!

A brilliant budget release destined for a very high chart placing. This is like something that would probably have come from Ultimate and have been described as a major leap forward in games technology last year.