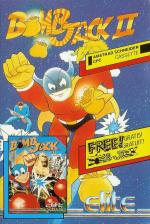 No, it's not another arcade conversion because this game takes the arcade original and improves on it with a completely new game. The star is still Jack and he's still got plenty of bounce in his legs but he's after gold bags instead of bombs and life has got a lot tougher.

The version we saw still had refinements to be made to the graphics and backgrounds. But the gameplay was finished and mighty impressive too. Jack has to collect ten bags of gold from each of the game's forty screens, avoid monsters on the way and try to pick up large bonus scores.

Each screen is composed of a number of platforms. If they are aligned horizontally or vertically you can jump between them just by walking off the edge of a platform or pushing up or down on the joystick. Collect one bag and another will start to flash. The more flashing bags you collect, the bigger the bonus score.

Things aren't that simple of course. Monsters patrol many of the platforms, and as time passes they mutate into more dangerous beasts. These can be confronted and killed in a battle of strength but they'll only reappear to haunt you later.

Although the game is simple in concept, some of the platform layouts are devilish, making it very difficult to get the bags and stay alive. 40 screens should be more than enough to keep you going. This looks set to be as addictive and easy to play as its predecessor.