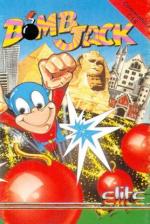 After Frank Bruno's Boxing on the C16 I was very disappointed to see this grotesque parody of the previous version that I have seen.

The gameplay is similar to the original in that you play a little 'creature' (what it is I have no idea!) that whizzes around the screen defusing bombs. Various other nasties turn up to try and dissuade him.

The original had a number of backdrops to the action with scenes from around the world. However, the C16 game only has one - the Sphinx, though it is nice. There seem to be fewer nasties than usual, though to cover this they move faster than you would normally expect.

The graphics are fairly good though they have character square movement and blank out anything that is behind them on the screen, so characters seem to have an 'aura' around them when they move.

Dedicated Bombjackers reel in disgust at this game, though a C16 owner may think slightly differently, though I don't think he would think much differently.

Dedicated Bombjackers will reel in disgust at this game, though a C16 owner may think slightly differently (though I don't think he would think much differently).